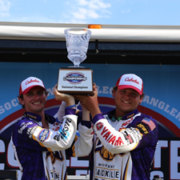 Day Two of the 2017 BoatUS Collegiate Bass Fishing Championship presented by Cabela’s on Pickwick Lake began with calm and cool conditions.  How another weather change would affect the fishing conditions was on the minds of the top five teams, all of whom had weighed in more than 20 pounds on day one.   The day one leaders, Tusculum College team of Nick Hartfield and Corey Neece, had a narrow lead of only ounces over  Dakota Ebare and Justin Seeton from Tarleton State University as well as Sloan Pennington and Hunter McCarty from the University of North Alabama.  Sitting in fourth and fifth, respectively, were Wyatt Young and Tucker Sargent another team from Tarleton State University, and the defending Champions Mitchell Jennings and Cole Burdeshaw from Auburn University.

All the teams we’re hopeful for a similar start on day two that was seen on day one, where a fast and furious start for many teams had them catching them one after the other. To say the least all the teams in contention had very high hopes and expectations for the championships final day.

The only thing left was to gamble on a long run or stick closer to take off.  With the slick conditions at sunrise it didn’t take long for all the teams to decide  making a long run.  With the TVA scheduled to be pulling very little water from the Wilson Lake Dam and the early morning bite was noticeably slower than day one.  Reports of fish catches started to slowly come in and it seemed the deep bite was the one that anglers were concentrating on to start the day but for the top five teams from day one the fish we’re all considerably smaller to start the day.

As pattern information began to trickle in, the reports of anglers throwing swimbaits, deep diving crankbaits, and big flutter spoons as well as ten inch worms showed that the bite was all over the place.   Eventually event many teams moved to even finesse techniques in hope of triggering a bigger bite.  At mid morning the race was still tight and without wind and current it appeared it might stay that way all day long.  Then it all changed as the TVA let out more and more water and the culling began for teams in contention like Auburn and The University of North Alabama

When it was all said and done and the scales stopped spinning, it was the home town team, and previous Cabela’s School of the Year team, the University of North Alabama that narrowly defeated the defending champions from the Auburn University.

Pulling out the huge win was the home town team of Sloan Pennington and Hunter McCarty who had back to back awesome days bringing in 21.02 pounds on day two,  giving them a two day combined weight of 44.33 pounds.  These two anglers on day one said they were the underdogs of the team and were not as good on Pickwick Lake as some of their teammates were.  These two anglers were more of “junk” fishing just going out and fishing to their strengths and having fun.   Both of the anglers actually said they enrolled at UNA to learn to be better ledge fisherman.

“Today was super stressful, we went to our first spot and didn’t catch a fish. At 12:30pm our bite turned on and we culled up the rest of the day to get our limit, we were thinking we only had 17-18 pounds. We had never fished the winning spot before, we actually found it in practice. We are super excited to win this event, we never, never expected to win this event. It still hasn’t set it. Going to be awesome to bring the trophy back to UNA,” said Sloan Pennington and Hunter McCarty. 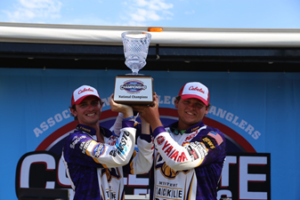 Coming in right being them barley a half pound behind was the defending champions from last year with 43.62 pounds.  Drawing on past experience of winning this event the team of Mitchell Jennings and Cole Burdeshaw from Auburn University made a great late day charge and came all the way from fifth place, and from almost four pounds behind, to barley being beaten.   Their last day charge had them bringing in the the biggest bag of the entire event with 24.02 pounds, five fish limit, to come within 0.71 pounds of being the first ever team to win back to back Championships.

“We found a good school early and was able to get a limit pretty early and then got the big one on a swimbiat later in the day. It was just an amazing day of ledge fishing.  It wasn’t too heart breaking to come in second, we are very proud and honored to finish second this year. A top five in any National Championship in any sport is huge,” said Mitchell Jennings and Cole Burdeshaw.

Coming in third was our leading team after day one, the team of Nick Hatfield and Corey Neece from Tusculum College, who brought 15.73 pounds on day two for a total of 40.07 pounds.  These anglers came out on day one with all cylinders firing and had one of the first limits on day one in the boat. Day two they struggled to find a school that had the size fish they needed to be catching to take home the victory.

“Our plan was the same as yesterday, we went out and started cranking right off the bat. We just didn’t get that big bite that we had on day one, we think it was a timing thing. We are blessed to be here and blessed to be doing this. Finishing third in our last college event of our careers, and this being a National Championship, is just awesome,” said Nick Hatfield and Corey Neece.

Bryan College was able to secure the Cabela’s School of the Year presented by Abu Garcia title. Bryan College had one of the best years in collegiate bass fishing, earning numerous top tens throughout the year, including having two teams in the top 50 at the 2017 BoatUS Collegiate Bass Fishing Championship.  University of North Alabama made a huge charge at the last event of the year, earning a first Place and fourth place finish to pull within 59 points of Bryan College in the School of the Year Race. 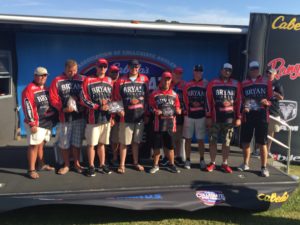