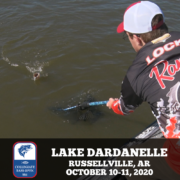 San Antonio, TX (October 8, 2020) – The second major televised event of the season on the Bass Pro Shops Collegiate Bass Fishing Series is the AFTCO Collegiate Bass Open.  Set to take place October 10-11 on Lake Dardanelle in Russellville, AR, the AFTCO Open is a two-day traditional five bass limit event that will pit 150 of the best collegiate bass fishing teams against one another as they compete for $20,000 in prizes and contingencies.  The field features 16 of the top 20 ranked bass fishing teams in the nation.   In order to take home their share of the prize, these anglers will have to crack the code out on the Arkansas River for two full days of competition.  In this article we will break down a variety of factors that will play a great role in determining a victor on Sunday.

The amount of rain that falls on Saturday has the potential for greatly impacting the lake level and water conditions.  Lake Dardanelle is located along the Arkansas River.  This river system receives a great deal of runoff from surrounding areas both around the lake and upstream.

Lake Dardanelle is known for having slightly stained to muddy water clarity.  When new water moves through the system, it will impact the water clarity.  There is a good chance that anglers will find a change in the water conditions from practice to Day 1 of competition.

There is good news to be had here though.  These fish are used to large fluctuations in water level and drastic changes in water clarity.  Two key items to locating these fish will be finding stable areas, and locating where exactly the fish are holding in these spots.

Each of the past two years, baitfish and rock banks with deep water access nearby have been the key contributors to a successful event for competitors in the AFTCO Collegiate Bass Open on Lake Dardanelle.  This impoundment on the Arkansas River features 34,300 acres of fish holding habitat with 315 miles of shoreline.  That shoreline is littered with rocks, wood, lily pads, and other varieties of vegetation.

As was mentioned previously, rock banks have been the main player for most of the field the last few years.  Rocky shorelines are littered all across Lake Dardanelle.  Those come in the form of riprap rock banks along bridges & railways, as well as natural chunk rock shorelines near creek bends and along the main river channel.  Each of these different areas provide anglers with a wide array of baits and techniques that can be implemented to catch fish.

Shad are the main forage of these Arkansas River bass during the fall months.  This brings three major tactics into play; spinnerbaits, crank baits, and topwaters. Taking into account the weather forecast for Day 1 of the tournament, these three baits could all be major players.  A shift in weather patterns for Day 2 could reverse these patterns, and force anglers to implement more finesse techniques to catch their fish.

Throughout practice, we have been receiving numerous reports of fish catches in the three pound range.  This appears to be fairly consistent with what Lake Dardanelle has produced over the course of the last few years.  It has taken a daily average of 14-15 pounds to claim the title in both 2018 & 2019.  The X factor will be locating that big bite.  If a team can manage to catch a five to six pound class fish to go along with a bag of three pounders, they will likely be able to separate themselves from the rest of the field with 17-18 pounds.  The 2020 AFTCO Collegiate Bass Open is once again setting up to be an exciting event, and we are looking forward to getting things started on Saturday morning. To follow all the action from blogs and live streaming, click here.