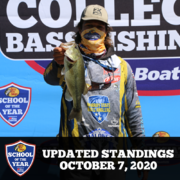 Adrian College Makes Move into 2nd Place to Trail by 45 points, and Montevallo Drops to 3rd in the Nation 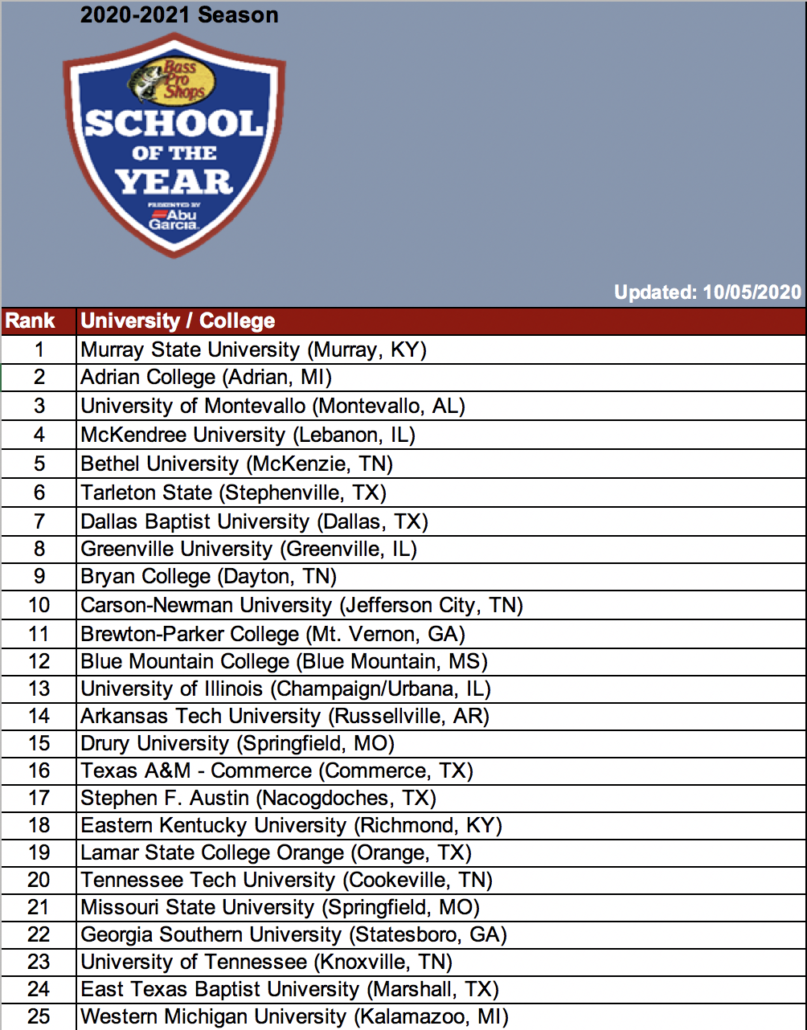 Top-ranked Murray State earned a total of 635 points in this update from the Bassmaster College Series event on Lake Cumberland last weekend.  Murray’s season points total now climbs to 5,490.  That is good enough to give them a 45-point lead over second place.

Trailing close behind in that second spot is Adrian College.  The team earned a total of 1,410 points in the past 10 days.  In the previous update, Adrian College was ranked fifth overall.  The team’s move up in the standings was bolstered by a win at an FLW Regional on the Chesapeake Bay.  Grant Gallagher & Ben Statly won the event with 18 pounds 2 ounces to earn Adrian College 750 points towards the School of the Year race.  Adrian College now has a total of 5,445 points for the 2020-2021 season.

The latest update to the Bass Pro Shops School of the Year presented by Abu Garcia is highlighted by another busy week of moves up and down the standings.  Here is a look at the significant movers:

Stephen F. Austin was one of the biggest movers in this standings update.  The team more than doubled its point total to move from 49th to 17th with 2,510 points.  Along with Adrian College jumping from fifth overall up to second, two other teams improved their standing inside of the Top 10.  Carson-Newman moved from 11th to 10th, and Bryan College bumped up one spot from 10th to 9th.

This upcoming weekend the Association of Collegiate Anglers will host its second event of the 2020-2021 season, the AFTCO Collegiate Bass Open.  14 of the top 16 ranked teams in the Bass Pro Shops School of the Year presented by Abu Garcia are registered to compete in this ACA major event that will feature a field of nearly 150 boats, thus making every fish catch count.  First place after two days of competition will earn 1,000 points for their respective school, and universities will earn points for their highest two finishing teams inside of the Top 100.  The AFTCO Open will prove to be a pivotal event in deciding who will win the School of the Year race.  An update to the School of the Year standings will be provided next week following the conclusion of this event on Lake Dardanelle.

Taking a Closer Look at Lake Dardanelle Leading Up to the AFTCO Collegiate Bass...
Scroll to top