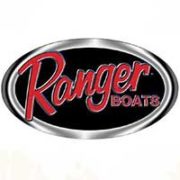 FLIPPIN, ARK.
In recognition and appreciation of

the thousands of service men and women across the country, Ranger Boats is offering engine horsepower rebates and other exclusive items to current and former military personnel through the 2016 “Operation Troop Salute” sales program. The retail promotion, available on qualifying new boat purchases made from authorized Ranger dealers, runs April 1 through December 31, 2016. 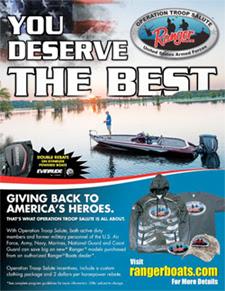 Through the program, any current or former member of the U.S. Armed Forces is eligible for the incentive package. The incentive package includes a factory rebate of $2 per engine horsepower from Ranger as well as a custom clothing package. The clothing package features a personalized, dye-sublimated hoodie along with a T-shirt, cap and decal available exclusively through the Troop Salute program.

Furthermore, Evinrude is offering an additional $2 on boats powered by Evinrude outboards, doubling the available rebate on those packages to $4 per engine horsepower.

To be eligible, customers must either be currently serving, retired from or have previous service in the U.S. Armed Forces. Qualifying boats include any new Ranger boat, motor and trailer package that has not been previously registered; and the program is not limited to the current model year.

For more details on “Operation Troop Salute” or to see the 2016 Ranger models, contact a local Ranger Boats dealer or visit www.rangerboats.com.

About Ranger Boats
Headquartered in Flippin, Ark., Ranger Boats is the nation’s premier manufacturer of legendary fiberglass and aluminum fishing boats, which include series of bass, multi-species, fish ‘n play, waterfowl utility and saltwater boats. Founded in 1968 by Forrest L. Wood, Ranger Boats continues its commitment to building the highest-quality, strongest-performing boats on the water. For more information, go to www.RangerBoats.com.

The University of Alabama Gains Control of the Cabela’s School of the Year...
Scroll to top