It is common that the top finishing team at any fishing event will receive the top prize, but in the 2016 Collegiate Bass Fishing Open Presented by Cabela’s, many teams went home with full pockets, thanks to the numerous incentive programs offered by the Association of College Anglers and its partners, including the second place team who actually won more than the team in first.

As the 2016 Collegiate Bass Fishing Open Champions, the University of North Alabama took home $1,400 in Cabela’s gift cards, four Temple Fork Outfitter Rods, and four Cabela’s Collegiate Bass Fishing Series Buffs for the first place prize; however, because the team the winning team was wearing Costa Sunglasses, the team additional earned an easy $500. In addition to picking up extra cash from Costa, they also picked up another $250.00 as a team because they we’re wearing fishing jerseys from G2 Gemini. 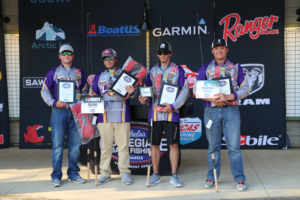 Placing second in the event and taking home the biggest prize pack overall was the Tarleton State Bass Team.  The team was able to walk away ahead of the first place team in prizes due to their contingency winnings. For their second place finish the team earned $900 in Cabela’s gift cards, four Temple Fork Outfitter Rods, and four Cabela’s Collegiate Bass Fishing Series Buffs; however, the team really cleaned house as the highest finishing Ranger Cup University anglers and were rewarded with an extra $500 check. 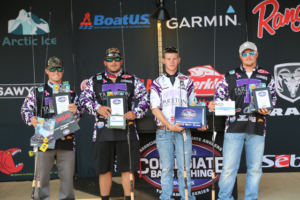 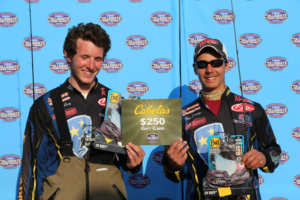 Finishing in fourth, the Murray State Bass Team was also able to cash in on the Cabela’s logo Contingency, earning the team an additional $250 on top of their fourth place prize of $500 in Cabela’s Gift Cards, four Temple Fork Outfitter Rods, and four new Cabela’s Collegiate Bass Fishing Series Buffs.

Find out how to be a part of all of these contingencies and more, today for the chance to earn extra cash in the Cabela’s Collegiate Bass Fishing Series by visiting the www.CollegiateBassChampionship.com website’s Discounts and Incentives page!