SAN ANTONIO, Texas – With less than three months left in the 2016 Cabela’s School of the Year race, schools from across the nation are in pure competition mode, searching for every possible point they can earn to add to their total. As it stands right now, the University of Alabama currently sits in first place with a total of 1481 points, followed by Mississippi State in second with 1466 points, and Bryan College in third with 1452 points.

“It definitely means a lot for us,” said John Davis, President of the University of Alabama Bass Team. “We set our goal as a team to win the School of the Year earlier this season. To see our where we want to be at the top of the rankings right now is really exciting. There aren’t too many events left throughout the rest of the year, so it’s something that we still have to put a lot of work towards, but we really want to be able to win that top prize at the end of the year.”

“We’ve got a really good group of guys that really want to win this title. It would mean a lot to us to be number one in the nation and it would really mean a lot for the club,” added University of Alabama Bass Team member, Payton McGinnis. 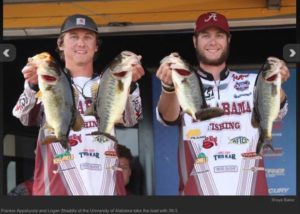 Reflecting on previous years, Davis understood exactly what kept the University of Alabama Bass Team from winning the Cabela’s School of the Year title, which led the team to a change in strategy for 2016.

“The last two years we added it up and we found that if we had sent teams to the ACA events, we would’ve won the whole thing. This year, we decided we’re going to win it. We’ve sent teams to every event so far and while we might not have won them, we earned valuable points,” said Davis.

“The ACA Events help us a ton in the Cabela’s School of the Year race,” said McGinnis. “We’ve had pretty decent finishes but really having guys at each event to help us get those double points events really helps us in the race.”

“The Championship definitely has a big impact. It’s a fun event, Pickwick always fishes well, and it means a lot to do well here, even outside of the points. There are usually around 160 to 170 boats so there are definitely solid points to be earned at this event too. UNA has won the School of the Year title two years in a row and they’re kind of like our in-state rivals, so we’re going to their home lake to try and beat them in the championship and for the title this year,” stated Davis.

McGinnis and Davis are no strangers to this event either as they placed 7th overall in the 2015 championship event. The duo was also awarded the Ranger Cup contingency, which consisted of a $1,000 check and the opportunity to compete in the Ranger Cup University Challenge on Bienville Plantation in Florida, as they were the highest finishing Ranger Cup qualified team. 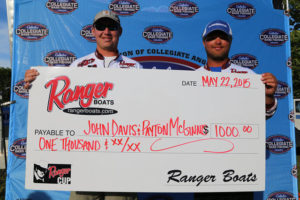 “The Ranger Cup was super easy to qualify for as it’s just signing up online for free and meeting the jersey requirements. Ordering jerseys through Gemini jerseys makes it that much easier because they even help you out with logo placement,” said Davis. “A lot more guys are signing up for this contingency so we’ll need a higher finish than seventh this year I would imagine, but we’re definitely going to do our best to win it again.”

The University of Alabama team of John Davis and Payton McGinnis look forward to the remainder of the season with hopes of maintaining their current Cabela’s School of the Year status by finishing well in the BoatUS Collegiate Bass Fishing Championship Presented by Cabela’s.

“This year’s events have gone well for us and it’s definitely reflected that way for us in the points,” added Davis. “Dardanelle was tough but our team was able to come back on the second day and get some solid soy points, and there were a few other events that we could’ve done better in but for the most part we’ve done great as a team and we just need to keep it up.”

“The BoatUS Championship event is something we’ve been looking forward to since last year. Pickwick is a big bass factory. The fish are going to be out on the ledges again and you’re going to catch a ton of fish, meet with all the sponsors, and just enjoy a week of fishing with the best of the best in college fishing. Some of these guys are for sure going to fish professionally and knowing that it just makes you more motivated to put in the time to do well at this event,” said McGinnis.

The remaining Top Ten in the Cabela’s School of the Year Race are as follows: