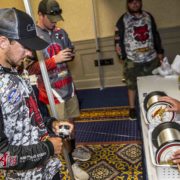 Good morning from Lake Dardanelle and Russellville, AR!  Anglers are lined up at the ramp, and making their way out onto the water in preparation for the first day of tournament action of the AFTCO Collegiate Bass Open.  Speaking with many of the competitors at registration last night, everyone is excited to get things started and go catch fish.  Winning weight predictions have ranged from 27 lbs to roughly 40 lbs.  Take off will begin at 7:00 AM with the first flight due back at 3:00 pm.  Stayed tuned for more updates and images as tournament competition begins. 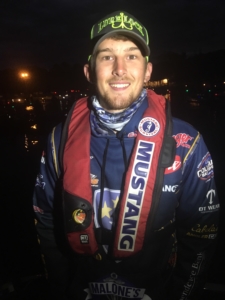 We are just 10 minutes away from the beginning of the AFTCO Collegiate Bass Open! Anglers are geared up and ready to go, as you can see Nick Inzeo from Murray State University pictured wearing his Mustang lifejacket.  The air temperature right now is 51 degrees.  Winds are light and variable.  Through the past few days the wind has blown strong as a recent front pushed out of the area.  Along with the lighter winds today, we are expecting increased cloud cover.  Beginning just after noon today there is also a chance of rain in the forecast.  Under normal fishing situations, the current changing conditions should be conducive to a strong bite today.  We will know shortly how strong the bite will be this morning. 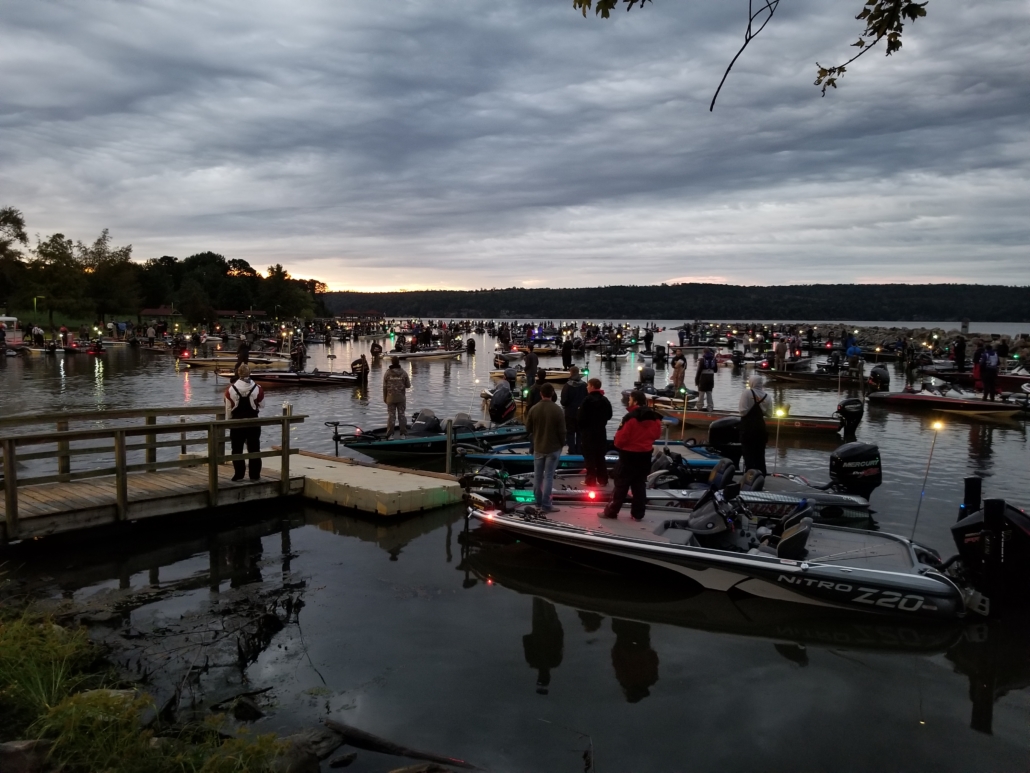 It is a beautiful morning to go fishing!  The AFTCO Collegiate Bass Open marks the first event fished in the fall as part of the Cabela’s Collegiate Bass Fishing Series.  Close to 200 boats, and 400 total anglers, have made the trip to Russellville, AR and Lake Dardanelle to compete this week.  Prizes, as well as plenty of SOY points, are up for grabs over the next two days.  The fish catching should begin soon and we hope to have further updates momentarily. 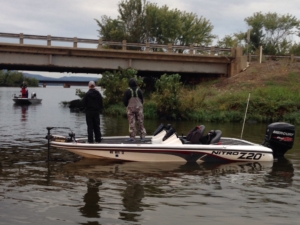 The first images are coming in from off the water.  Anglers are bouncing around fishing bridges not far from take off here at the state park.  The riprap and flooded brush along the bridges are a great area to get a solid number of bites on Lake Dardanelle.  Fish will hang around the rock year round feeding on shad and soaking up the heat generated by the rocks.  Several of the main baits that will work well around these areas include spinnerbaits, crankbaits, and soft plastics.

So far this morning it sounds like there are fish to be caught out on Lake Dardanelle.  Teams from both Bethel and Arkansas Tech are reporting they each have two keepers in the livewell.  The Arkansas Tech pairing is fishing near a bridge not too far from the launch site.

A steady, light rain is falling here at the launch site.  It appears that this rain will hang around for most of the morning.  There’s also a chance that the rain will continue on into the afternoon.  Today is a typical fall, rainy day.  Conditions such as this should do nothing but help the bite, although it may be a little uncomfortable for the anglers to fish in all day.

Reid Strobl and Jake Soto from Dallas Baptist University are experiencing engine trouble and have been forced to fish close to the ramp this morning.  The pair has managed to catch three keepers so far.  If it weren’t for a few fish jumping off, they would already have a limit. 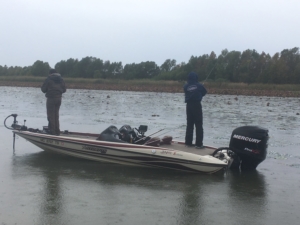 Pictured above are Nick Montilino and Nick Inzeo from Murray State University.  One of our camera crew members is paired with them to start the day.  So far they have a total of four fish in the well.  It appears that they are working shallow lily pads in search of their fifth keeper.

Here is an update on the current leaders of the Cabela’s School of the Year Presented by Abu Garcia.  The Adrian College team of Jack Hippe and Griffin Fernandes currently have zero fish in the box.  They attempted to lock down this morning and were unable to do so due to scheduled barge traffic.  Now the duo is bouncing around near take off and have managed only several short fish. 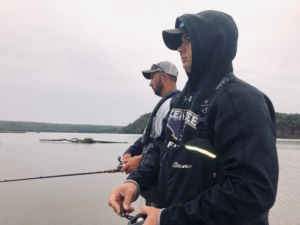 Ethan Jones and Trevor McKinney from McKendree University check in with two fish.  Neither of the fish are of much size.  Sitting in 5th place for the Cabela’s School of the Year Presented by Abu Garcia, McKendree University has a good opportunity to gain valuable points this week.  With the 2nd place team of Bemidji State University not present at Lake Dardanelle, there is guaranteed to be a shake up towards the top of the standings.

For schools bringing multiple teams to Arkansas this week, they will be eligible to earn double points.  The two highest finishing boats inside the top 100 will have their points count towards their team’s total. If a school has teams finish 1st and 2nd, then they could earn up to 995 points.  A significant jump in points will go a long way in helping teams move on up in the standings.

Two quick updates on teams towards the top of the standings for the Cabela’s School of the Year Presented by Abu Garcia.  Jack Hippe and Griffin Fernandes for 1st place Adrian College now have one small fish in the box but that is all.  For 4th place Murray State, Nick Montilino and Nick Inzeo have added a fifth fish to complete their limit worth an estimated 9-10 lbs. 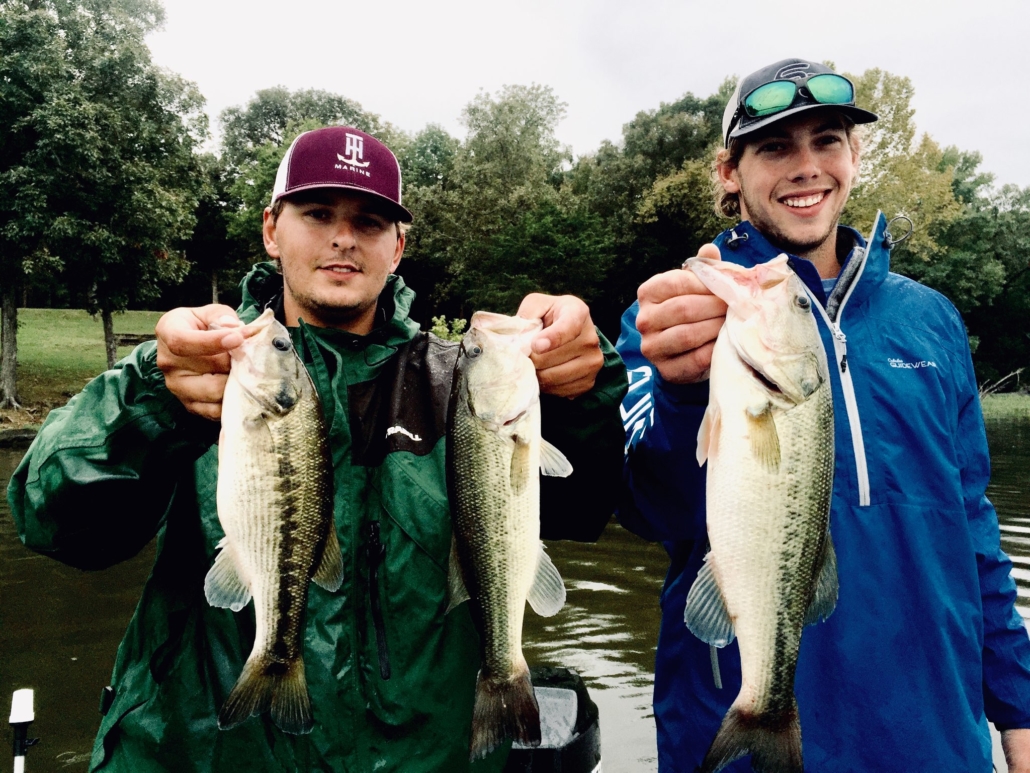 Updates coming from out on the water have been fairly slow this morning.  There does not appear to be a ton of fish catching out on Lake Dardanelle.  During the past two days of practice anglers had reported a change in conditions, and that they were having difficulty getting these fish to bite.

Grant Hyche and Seth Anderson from Mississippi State University have several nice fish in the boat.  They are pictured above with three keeper fish, one of which looks like a quality sized largemouth. 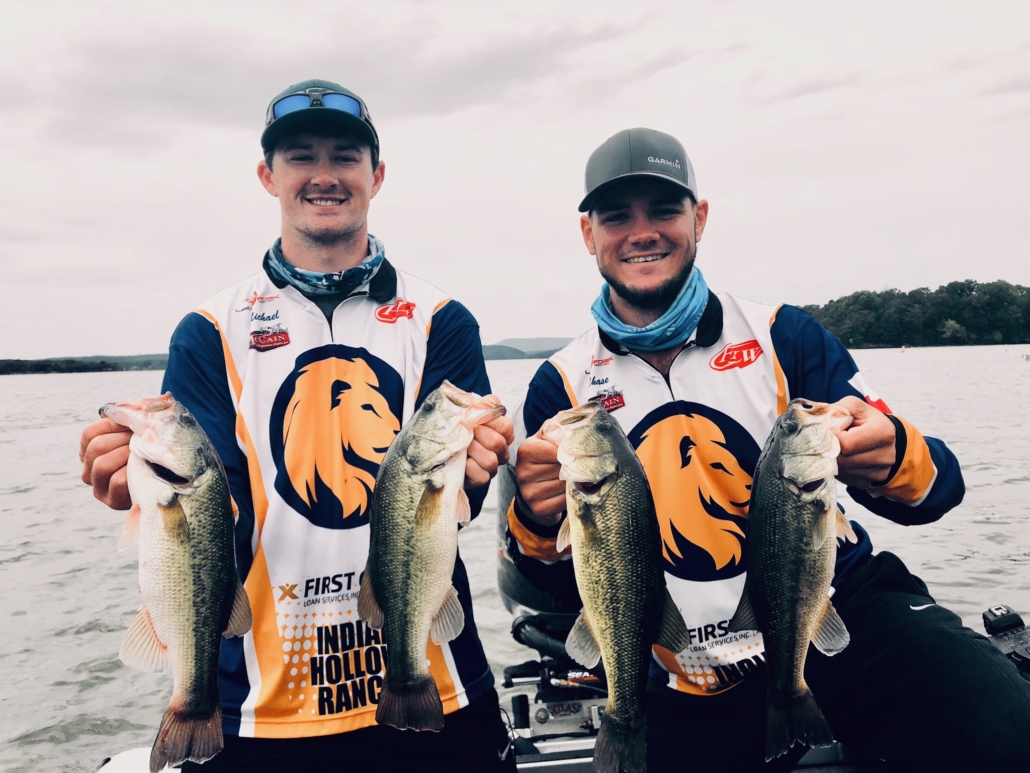 Another reported limit has been sent in.  Michael Wallace and William Fitzgerald from Texas A&M University-Commerce have five fish in the well.  They report the limit is on the smaller size.  It appears they have roughly eight to nine pounds total.  This makes one of just a handful of limits reported today.

Austin Peay State University has checked in with just one fish.  Daniel Cheshire and Caitlyn Clark are on the move in search of more bites. 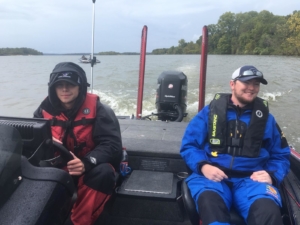 Blake Jackson and Brady Faust are all smiles as they cruise across Lake Dardanelle.  The McKendree University anglers have a limit good for around 11 lbs. 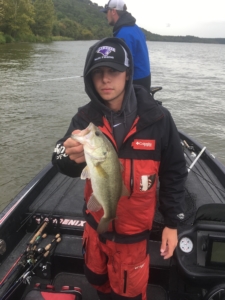 UPDATE: Jackson and Faust from McKendree caught another keeper.  This fish will add close to a pound to their limit, culling them up to around the 12 lb mark.

The afternoon bite seems to be picking up as a string of updates just rolled in.

A pair of anglers from Bryan College have checked in with a limit for roughly 10 lbs.  This is the first update we have received from the former champions of the Cabela’s School of the Year Presented by Abu Garcia.

Reid Strobl and Jake Soto from Dallas Baptist University have been forced to fish around the state park area as they suffered boat problems right at the beginning of the day.  They have now completed their limit, and are estimated to have 11-12 lbs.

Michael Wallace and William Fitzgerald from Texas A&M University-Commerce just culled up with another solid fish.  There is a good chance that fish will push them into double digits.

With weigh-in a little over an hour away, we are going to go ahead and shut down the blog for the day.  Action picked up some in the afternoon, but we have yet to hear of any significant weights.  Given the conditions out today, there is a good chance that several teams will cross the stage with a solid limit.

At weigh-in today you will see anglers out with yellow bags collecting trash.  This is part of the AFTCO Bank Bag program.  When an angler turns in a yellow bag full of trash, they will earn a $25 AFTCO gift card.  One of AFTCO’s main goals is conservation, and preserving the resource for future generations to come.  The Bank Bag program is just one of the many initiatives AFTCO has in place to promote conservation in the outdoors.