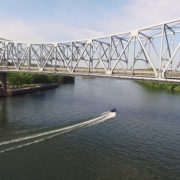 The 2017 BoatUS Collegiate Bass Fishing Championship presented by Cabela’s is not just a fishing tournament – it’s a weeklong celebration of college fishing.  The entire week is devoted to all the anglers and schools that are competing.  The Association of Collegiate Anglers and its supporters all try to go above and beyond for the competitors that will be in Florence, Alabama competing for both the crowning of the 2017 BoatUS Collegiate Bass Fishing Champion, as well as the awarding of the 2017 Cabela’s School of the Year presented by Abu Garcia Title. 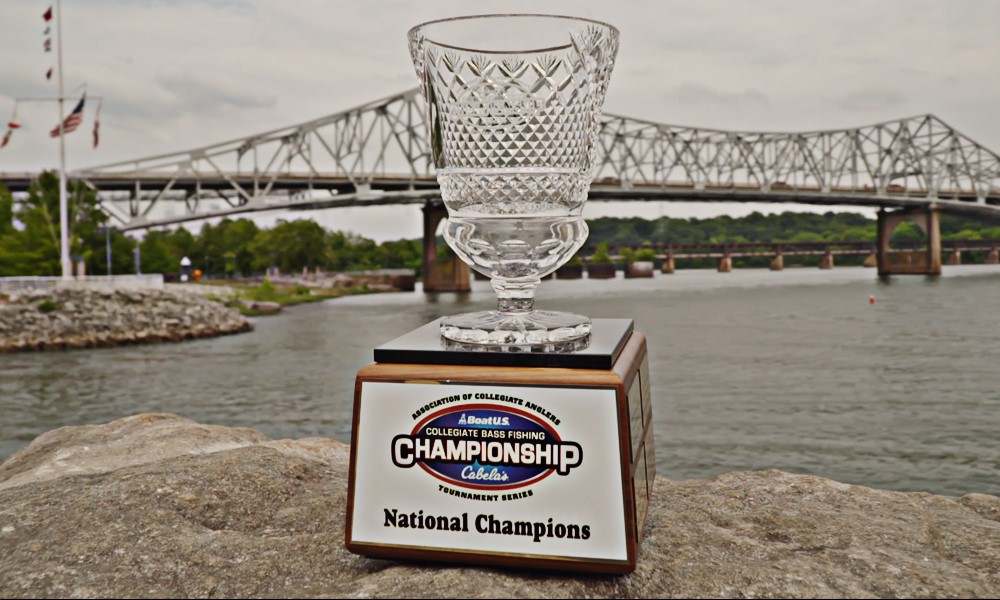 Collegiate anglers from across the nation will enjoy a week full of fishing on one of the hottest lakes in the nation.   With official practice starting Sunday, May 21st at sunrise, anglers will have plenty of study time on the lake to find schools of trophy bass.  On Monday, anglers continue practice while tournament staff are on-site setting up for all the week’s festivities.
The first official gathering of college anglers is at the mandatory Yamaha Angler Appreciation night that will take place on Tuesday, May 23th from 4:00-7:00pm.  Anglers will be greeted with a casting contest featuring a ton of great prizes as well as dinner provided by Yamaha. Garmin Marine will be on hand doing demonstrations of their latest electronics, and Ranger Boats will be providing demo rides for college anglers as well.   In addition, Cabela’s will be present with a special display to test the multi-faceted skills of these college anglers.   All of these events will provide a wide range of prize opportunities.
Practice continues through Wednesday, before the anglers head to the BoatUS Championship registration banquet taking place at the Marriot Shoals Conference Center in Florence, Alabama.  The following companies will be on hand to meet, greet, and provide a variety of items to the college anglers, as hosted by Florence/Lauderdale Tourism:  Cabela’s, Ranger Boats, Yamaha, Garmin, Berkley, Abu Garcia, Power-Pole, Bob’s Machine Shop, Costa, BUFF, Gill, Sunline, Big Bite Baits, HydorWave, Denali, Arctic Ice, and more.
This year’s guest speaker will be Bassmaster Elite Series Pro Mark Daniels, Jr. who will be sharing his story about being a professional angler, as well as other insights into fishing.
Following the registration banquet presented by BoatUS, the morning that the anglers have thought about nonstop will have arrived.  During Day 1 launch and pre-takeoff, anglers will receive snacks for the day provided by BUFF, and ice provided by ProRule.  Anglers will then weigh-in beginning at 2:30pm and will be served dinner presented by Costa directly after the weigh-in.
The anglers will then be back at McFarland Park on Friday for takeoff of the final day of competition.  Anglers will again receive snacks for the day provided by Bob’s Machine, and ice provided by Russell Marine Products.  Anglers will weigh-in beginning at 2:30pm with the awards ceremony to follow and dinner provided by Cabela’s.
For the first time in the history of the Cabela’s Collegiate Bass Fishing Series, we will be awarding the Cabela’s School of the Year presented by Abu Garcia Title after the final weigh-in at the Championship.  The Association of Collegiate Anglers (ACA) manages the multifaceted Cabela’s School of the Year presented by Abu Garcia program to both rank and reward collegiate bass fishing teams throughout the country.  The program has been built to reward and recognize teams that compete on the water in numerous national level trails such as the Cabela’s Collegiate Bass Fishing Series, as well as select national College B.A.S.S and FLW events in order to truly crown a school of year champion based on performance.
Below is the complete schedule for Championship Week:
Schedule of Events 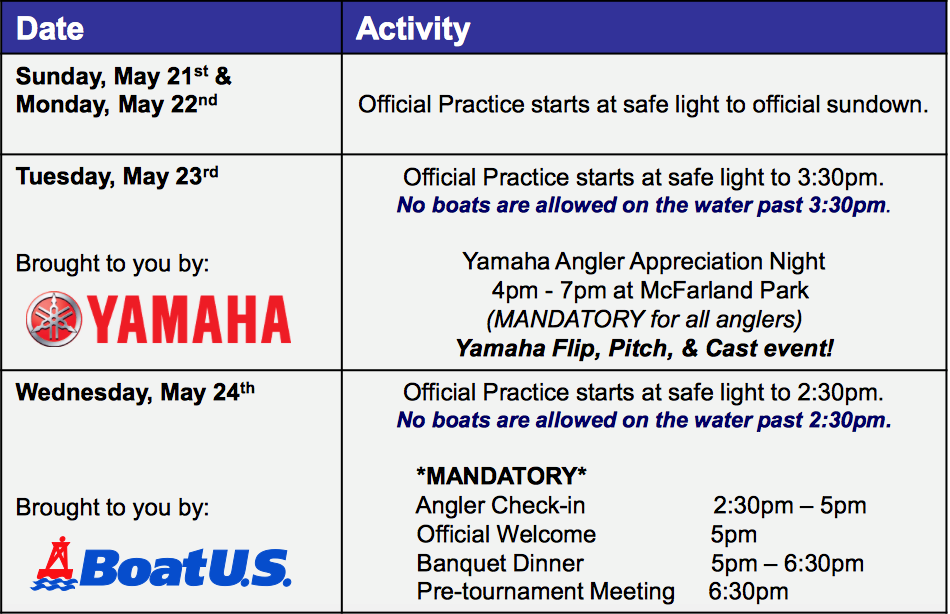 Time to Gear up for the 2017 BoatUS Collegiate Bass Fishing Championship presented...