SAN ANTONIO, Texas – As Florence, Alabama’s hometown favorite, the University of North Alabama, claimed fourth and fifth places this past week in the 2016 BoatUS Collegiate Bass Fishing Championship Presented by Cabela’s on Pickwick Lake. Each team proved their extensive knowledge of the lake to earn the school two top five finishes, thousands of dollars in cash and prizes, and valuable Cabela’s School of the Year points.

The team of John Maner and Colby Harville sacked up a two day total of 36.47lbs by doing what they do best – fishing ledges. Being the local team, the University of North Alabama is able to get out on Pickwick Lake throughout the year more than others, and while some locals claim a home lake curse, Manor and Harville used their experience on the lake to their advantage. 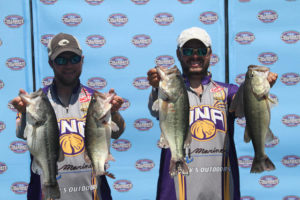 “For people on our team, you can usually find a team on the water any given day of the week. With as big as our club is, there are members that try to fish that lake four to five times per week. There aren’t many big tournaments out here that our team fishes besides the Championship, but we fish out there quite often,” said Manor. “Me and my partner split up during practice so we could cover more water. We found a lot of fish in practice, but we really didn’t fish at all. All we did was graph and look for schools of fish.”

Each team seemed to have found one key bait that their schools would eat and for Manor and Harville, that remained true all week.

“There was the only bait that we could get them to eat and that was a jig. We heard of other guys throwing a spoon or a crankbait, but every time we threw those, our schools would scatter, but really, it’s always good to finish that high in that caliber of a tournament, but I feel like day two it was a lot different and schools were moving. I felt good that we were able to go out and basically find all new schools to catch our fish. That’s one way that being a local actually helped us out.

Manor looks towards the remainder of the Cabela’s School of the Year season as the University of North Alabama team makes a leap in the standings.

“We still have a long way to go and luckily we have teams going to sanctioned events still, but we want to keep the title in our school for sure,” said Manor.

For their efforts, Manor and Harville won $1,000, one pack of Arctic Ice, and two Cabela’s Collegiate Bass Fishing Series BUFFs®; however, for being the highest finishing Ranger Cup qualified team, Manor and Harville won an additional $1,000 and will be competing in the Ranger Cup Challenge – an all-expense paid fishing trip in which they will be competing against the University of South Carolina for a $2000 cash prize!

UNA’s Koby Littrell and Martin McCravy ended the 2016 BoatUS Collegiate Bass Fishing Championship Presented by Cabela’s with a 35.65lb two day total of Pickwick Lake bass. Like the rest of the top teams, Littrell and McCravy made a run to the upper end of Pickwick Lake to get to their main school, but stayed in one key area throughout the event.

“Our main strategy was to find a good school of fish and pick them apart with finesse baits,” said Littrell. “The fish were really finicky because of all the pressure from this tournament and the FLW event two weeks before, so they were heavily pressured which led us to throw a shakey head and a drop shot to get them to bite.” 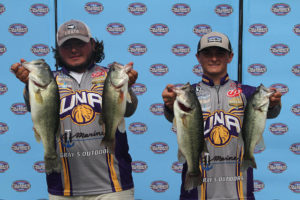 Unlike other teams, Littrell and McCravy only had one main school of fish that they stayed on while others ran from school to school.

“We had one main school that was on a shell bed where we caught all our fish out of,” said Littrell. “The only thing we could get them to bite were finesse baits.”

“We really didn’t run around that much off of our main school because if we did, we could never get that school to fire back up,” said McCravy.

For their fifth place finish, Littrell and McCravy won $750 cash, one pack of Arctic Ice, and two Cabela’s Collegiate Bass Fishing Series BUFFs®, however, finishing with two teams in the top five, the University of North Alabama will come home with more than just cash and prizes. The teams are happy with their finish and their opportunity to move up in the coveted Cabela’s School of the Year Rankings.

The University of Alabama Remains at the Top of Cabela’s School of the...
Scroll to top