The University of Alabama bass teams competing at the recent championship had three great finishes on Pickwick during the championship two of which counted for the standings towards the Cabela’s School of the Year race.   Senior and President of the University of Alabama Bass Fishing Team, John Davis, and his partner Payton McGinnis finished the event in sixth place, while their 2nd team  of Adam Neill and Anderson Aldag finished in eighth. 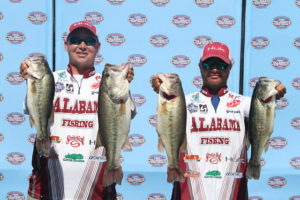 “We had a good tournament at the BoatUS Championship. It didn’t go as well as my partner and I would have liked, but it was awesome to have our three teams finish in the top fifteen and two in the top ten for Cabela’s School of the Year points, so overall it was a great finish, that bumped us back into a fifty point lead,” said Davis.

With only a few sanctioned events left in the season, the University of Alabama recognizes that the title has yet to be won, and there are still many points up for grabs.

“It feels good to have the lead at this point with only a few events left,” said Davis. “We only have one more event, but there are some other schools like McKendree that still have some regional events where they can earn more points, but hopefully we can earn enough at our next event to hold on.”

Setting goals as a club early in the year is what can really make or break a team’s success and the University of Alabama decided that this season was a year to go big or go home. Davis and the rest of the team knew from the start the Cabela’s School of the Year title was a goal that could be attained, but one that would take hard work.

“It would mean a lot to win this title and it was our goal from the first of the school year. We really have a dedicated team and we all want to win this. It would mean a lot to me as well, being the president of the team in my last year, to win this title. I definitely have extra interest in the team because of my position, but it’s all about the team effort for us. It’s been fun organizing different things throughout the year, but really it’s because our whole team has put in the work that we are where we are right now,” said Davis.

“Part of our motivation has been seeing UNA do it twice in a row. They’re a huge rival of ours and while they’re not necessarily a rival in football, they are on the water. It would be a big deal to take the title this year to show that they’re not the only team in the state that can get it done. We know quite a few of the guys on their team and we’ve gotten to be good friends with them. It’s definitely not a bitter rivalry, but we always want to beat each other at every event we compete in.” 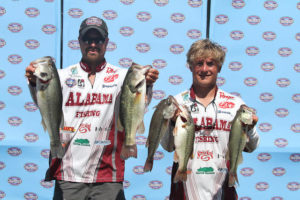 Winning the Cabela’s School of the Year title is unlike any other title in college fishing. To win this title, a school must not only do well in a single tournament or series, but they must do well in every tournament and series in which they compete. With a Cabela’s School of the Year title on the University of Alabama Bass Fishing Team’s resume, Davis knows that there can be many positives that can come from it.

“Right now we have right at thirty two members, but winning this title would do a lot for the team,” Davis said. “It would give us a lot more notoriety and local publicity to let everyone know that we exist, which is a big problem for a lot of collegiate bass teams. We would also surely get more notoriety within school which could maybe lead to more funding for the club, and then hopefully more notoriety with our sponsors as well, to let them know that we are working for them and we are the best team in the nation. If nothing else, winning this title would bring a lot of pride within our club, knowing we were number one for a full year.”

The remaining top ten in the Cabela’s School of the Year race are as follows: