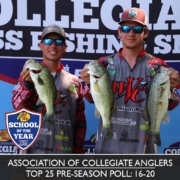 San Antonio, TX (7/20/2021) – The Association of Collegiate Anglers, which operates the Bass Pro Shops School of the Year program presented by Abu Garcia, is excited to showcase the pre-season rankings for college bass fishing according to a voting poll of top coaches, schools, media personnel, and fishing industry personalities with experience in college fishing.

This poll is a one-of-a-kind poll, similar to rankings in other college sports, that will help kick off the season-long race for the prestigious School of the Year title.   Every day this week the ACA will count down and showcase teams that made it into the Top 25, and then in the near future, the first rankings for the 2021-22 season will be announced based on finishes during events this summer. Today’s article will show teams that were selected 16th to 20th  in the pre-season rankings.

One of the newest teams on the collegiate fishing tournament trail last year was Wabash Valley College.  The team from Mt. Carmel, IL made its debut with the Association of Collegiate Anglers at the 2020 Bass Pro Shops Big 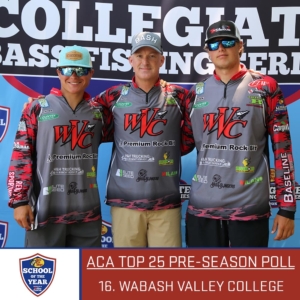 Bass Bash presented by Berkley, and was without question one of the biggest surprises of the college fishing season.  Wabash Valley College competed in all five ACA events last season and finished the year ranked the 20th best team in the nation thanks to several top finishes.

Following that phenomenal first season last year, Wabash Valley College has established itself as a team to be reckoned with on the college circuits, and will have to deal with the pressure now of being recognized as a Top 20 team in the nation.

“First we are honored to have obtained the respect of our peers so quickly,” noted Todd Gill, Head Coach at Wabash Valley College.  “I think it says we have done well in recruiting anglers who are willing to work hard in preparation, who are willing to grind the entire 8 hours knowing that each catch and each cull over the course of a season will pay big dividends.  We are going to have to stay humble and keep at it though as the competition is stiff and the learning curve is steep.”

Wabash Valley College was recently featured on the Rapala #WeAreCollegiateBass Podcast to talk about its first season as a collegiate bass fishing team.  The school is continuing to recruit at a high level as it builds towards the future, and what they hope will be a Top 10 season very soon.

Listen to the podcast episode.

“Our goal for this season is to finish Top 10 in the nation. This is going to require greater cooperation between our anglers to help with breaking down new water more quickly. Having our first sophomore class with some experience and knowledge of bodies of water and what it takes to compete at a high level should help as well. We are excited about the coming season,” added Gill.

Brewton-Parker College lands in 17th following the ACA Top 25 Pre-Season Poll according to the voters in the poll.  This 17th place pre-season ranking is five spots lower than where Brewton-Parker finished the 2020-21 season.  The team finished last year as the 12th ranked team in the nation based on their finishes on the water in numerous collegiate events.

Brewton-Parker has a strong core of anglers that can catch fish on any body of water nationwide.  The team earned points at all five ACA events during the 2020-21 season.  In three of those five events, Brewton-Parker had at least one angler finish in the Top 25 of the overall standings.  Cory Yaden and Blake Stephenson put together the team’s highest finish at an ACA event by claiming 5th place at the 2021 BoatUS Collegiate Bass Fishing Championship presented by Bass Pro Shops.

As a team, Brewton-Parker has continued to get better year after year.  Here is where the team has finished in the rankings each of the past four seasons:

It is pretty easy to observe the growth that has occurred within the Brewton-Parker College Fishing Team.  If history is any indication, it should not come as a surprise if Brewton-Parker finishes the 2021-22 season in the Top 10 at the end of this race.

College fishing is one of the most unique college sports as college teams and clubs from all levels and divisions compete against each other at events.  Major state schools, private institutions, and smaller schools like community colleges are all able to fish the same events and compete for national titles.

Catawba Valley Community College, along with the aforementioned Wabash Valley College, has proven that it can compete with the bigger schools and programs out there.  It is very likely that a community college or junior college will finish the 2021-22 season ranked inside of the Top 15.  It remains to be seen if they can crack the Top 10 this season.

Having just pointed out the parody between Catawba Valley Community College’s 2021 end-of-season ranking and its standings in the pre-season poll, we now have Missouri State University.  The team from Springfield, MO finds itself ranked 19th in the ACA Top 25 Pre-Season Poll.  That ranking matches the team’s final ranking in the 2021 race that landed them just inside the Top 20 teams in the nation.

That is pretty good consistency, and consistency is a word that well defines the Missouri State University Fishing Team.  Since 2016, the team has an average ranking of 24th.  The highest finish during that stretch came in 2018 when the team finished the year ranked 12th in the Bass Pro Shops School of the Year presented by Abu Garcia.

With their school located in Springfield, MO, Missouri State University anglers are exposed to a wide variety of fisheries.  From shallow, muddy rivers to deep, clear highland reservoirs, these anglers face an array of conditions that benefit them out on the national trails.  The additional impact this has on the success of the program is evident in their results from the past five seasons, and expectations are high that Missouri State could be a team that might climb higher in the rankings, should they have a few Top 10 finishes on the national scene this year.

The final team in this installment of the Top 25 Pre-Season Poll reveal is the University of North Alabama.  Located in Florence, AL, UNA is one of the most decorated teams in the history of collegiate bass fishing. 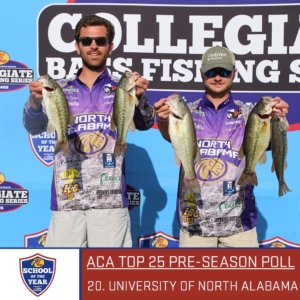 UNA won the Bass Pro Shops School of the Year presented by Abu Garcia in 2014 and 2015, at the time becoming the first school to ever win this title in back-to-back seasons.  Along with two School of the Year titles in the trophy case, UNA also has an ACA National Championship title to its name.  Sloan Pennington and Hunter McCarty won the 2017 BoatUS Collegiate Bass Fishing Championship on Pickwick Lake.

Pickwick is the home body of water for UNA.  One of the premier ledge fishing lakes

In the country, the Tennessee River impoundment will be the playing field for the 2022 ACA Championship once again.  UNA has its sights set on climbing up the School of the Year rankings, as well as claiming another Championship title at Pickwick Lake.

“We plan on moving into the top five and also keeping the National Championship trophy right here in Florence, AL,” said Benson Dowler, UNA Team President.   UNA could easily be a Top 10 team this year, and it’s surprising to many that they are starting the season ranked 20th in the pre-season poll.  Should UNA get back to form at events outside their local area by capturing a few Top 20 finishes, they may once again be in position to win the School of the Year title, thanks to a talented roster of returning anglers.