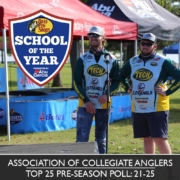 San Antonio, TX (7/19/2021) – The Association of Collegiate Anglers, which operates the Bass Pro Shops School of the Year program presented by Abu Garcia, is excited to showcase the pre-season rankings for college bass fishing according to a voting poll of top coaches, schools, media personnel, and fishing industry personalities with experience in college fishing.

This poll is a one-of-a-kind poll, similar to rankings in other college sports that will help kick off the season-long race for the prestigious School of the Year title.   Every day this week the ACA will count down and showcase teams that made it into the top 25, and then in the near future, the first rankings for the 2021-22 season will be announced based on finishes during events this summer. Today’s article will show teams that were selected 21st-25th in the pre-season rankings.

Arkansas Tech has a rich history when it comes to top finishes in college bass fishing.  Located in Russellville, AR, home to Lake Dardanelle, Arkansas Tech was picked 21st in the ACA Top 25 Pre-Season Poll by the pollsters, and 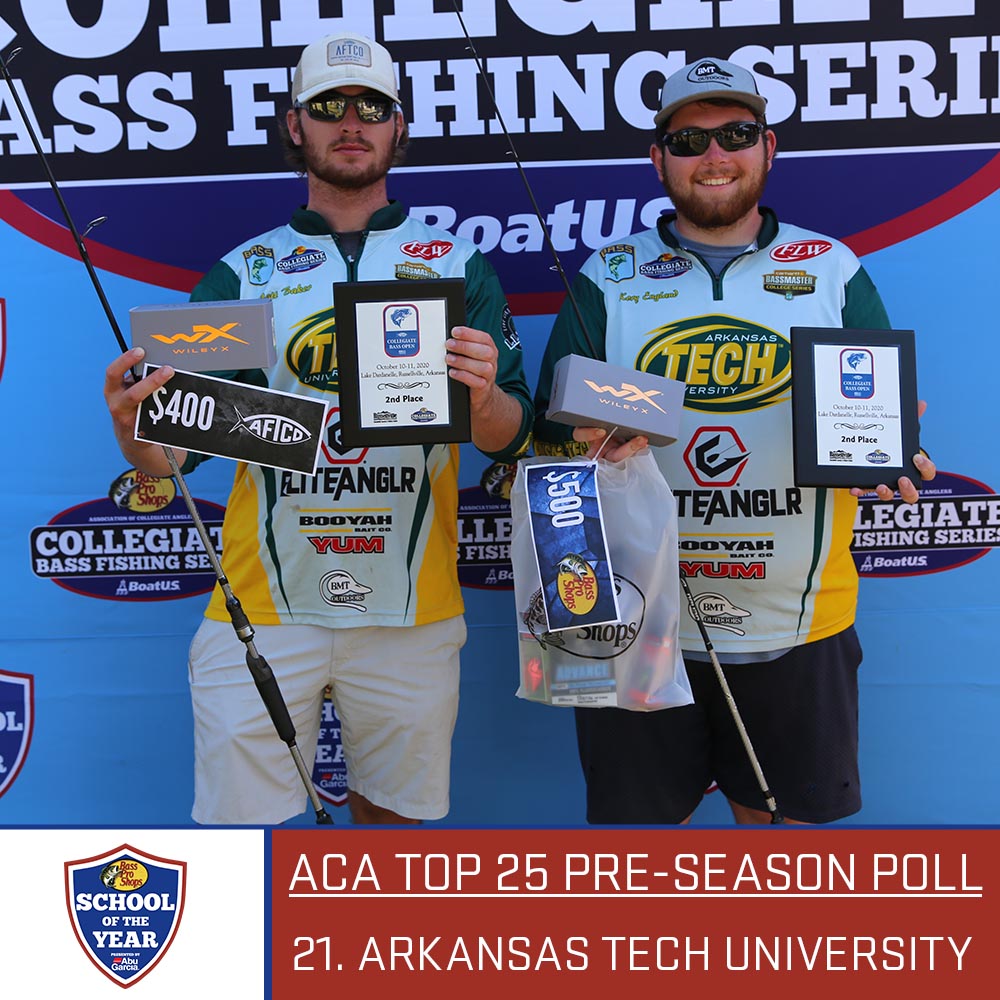 it’s no secret this fishing school could easily finish higher with top finishes at one of several events near its campus this year, as well as events far from home.

“It says a lot about our program! We have worked hard the last few years to send teams across the country to compete in as many tournaments as possible! To have members of the college fishing community identify our program as one of the best in the country means we are doing something right,” noted Tristan Weaver, Vice President of the Arkansas Tech University Bass Fishing Club.

Arkansas Tech University won the first-ever School of the Year title during the inaugural season of the program in 2012.  The small school in central Arkansas edged out the likes of Louisiana-Monroe and the University of Arkansas to take the first-ever title.

Following an 18th place finish in the 2020-21 School of the Year Standings, Tristan is keeping things in perspective as he hopes the club can improve on its Top 20 finish last season.  “This upcoming season, our main goal is obviously to be school of the year, but a top 12 finish would be great for our program!  We are hoping to have some ambitious freshmen start school in the fall and get to work at this season’s tournaments, along with our other anglers that have been competing!”

Stephen F. Austin State University ranks 21st in the pre-season poll.  The highest vote the club received in the poll was 2nd place by college insiders, which means some believe this is a Top 10 team in the nation that could contend for a School of the Year title.   Stephen F. Austin is one of the longest-running and most storied programs in collegiate bass fishing.  Though they have never won the Bass Pro Shops School of the Year presented by Abu Garcia, SFA Bass Fishing Club members have had strong showings at events all across the country through the years to include several wins.

One of the most notable alumni from this club is Andrew Upshaw.  After completing his college career, Upshaw pursued his dream of becoming a full-time professional angler.  Over the course of the past 10 years, he has secured numerous major tournament victories, competed in over 125 events, and earned upwards of $500,000.  In addition to Upshaw, there have been several others from the school go on to fish in professional level events, as well as work in the fishing industry.

The next team to be featured in the poll is East Texas Baptist University.  East Texas Baptist is ranked 23rd in the pre-season poll according to college fishing insiders.  Coming off of a 34th place finish in the 2021 School of the Year standings, the college bass fishing community believes that the team from Marshall, TX will have an improved season during the 2021-22 race.

East Texas Baptist has competed on the Bass Pro Shops Collegiate Bass Fishing Series for many years and is widely respected as a top collegiate fishing program.  Look for East Texas Baptist to have a strong season over the course of the next 10 months, and should they fish a full schedule of events…it’s possible this talented team of anglers could finish the year as one of the Top 10 teams in the nation.

Coming in at 24th in the rankings is Clemson University.  Clemson finished last season ranked 27th, following an 18th place finish in 2020. 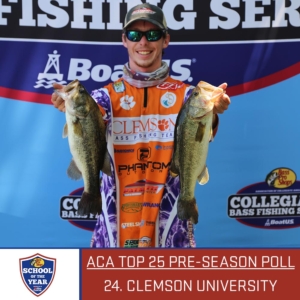 “The Clemson Bass Fishing Team is honored to be considered a Top 25 team in the country. It’s a great way to start the year, and as a team, we take pride in representing our college to the best of our ability, as well as the college bass fishing community,” said Robert Wise, Clemson University Bass Fishing Club member.  “This program has come a long way and being recognized by others in the college fishing world as one of the Top 25 teams in the country definitely shows the hard work and dedication that this team has put into this sport.”

Clemson currently has a strong roster of anglers.  The club dedicates a lot of resources to getting out on the national tournament scene and competing in as many events as possible.  That is the formula required to finish high up in the rankings at the season’s end.

“Our team’s goal is to continue to advance in every aspect of the sport, such as increasing the number of teams in each tournament, and letting the results show Clemson belongs in the Top 25 teams in college bass fishing,” added Wise.

Numerous members of the club have a strong history out on Pickwick Lake.  Look for the Clemson University Bass Fishing Club to make a lot of noise at the 2022 BoatUS Collegiate Bass Fishing Championship presented by Bass Pro Shops as the event returns to Florence, AL and Pickwick Lake, which could lead to them finishing higher in the rankings then being predicted.

The final team to be included in this rankings reveal is Greenville University.  A prominent and well-respected college fishing program, Greenville comes in at 25th in the collegiate bass fishing pre-season poll according to the voting panel.  Greenville finished the 2021 season ranked 21st overall.  The team’s 2020-21 campaign included points earned at the Bass Pro Shops Big Bass Bash presented by Berkley, AFTCO Collegiate Bass Open, and the Pickwick Slam.

In recent years, Greenville has experienced a good deal of turnover among its roster.  Several of the team’s top anglers have graduated, leaving the door open for younger underclassmen to come in and carry the torch for the program.  If these younger anglers can find their way and have some good showings, Greenville will continue its run as one of the best 25 teams in the nation, and possibly move into the Top 10 this year.