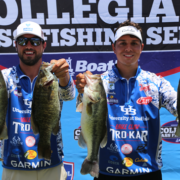 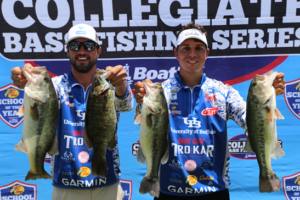 Pro Shops.  On average, it takes a two-day total exceeding 40 pounds to win the National Championship.  Tournament rules allow anglers to fish both Pickwick and Wilson Lakes during competition, but it has been several years since Wilson Lake played a significant role for a team finishing in the Top 10.  Austin & Anthony from the University at Buffalo broke that cycle this year at the 2020 Championship.  The duo weighed in a two-day total of 33.00 pounds to take home 5th Place overall.

“After a tough week of practice focusing mainly on Pickwick Lake, we decided we would take our chances and lock up to fish the tailwater of Wheeler dam on Wilson Lake. We only practiced up there for a few hours during practice, but we knew we could get a limit up there so that’s where we went day one,” noted Austin Ocwieja, member of the UB Bassmasters.  On Day 1, Austin & Anthony brought in a limit of bass weighing 14.49 pounds.  That was good enough for 24th Place going into the final day.

“After day one, we decided we were going to lock up again because we really figured out where the bass were piled up and what they were doing. We lost two key fish on day one that led us to believe we could get a heavier bag on day two,” Ocwieja added.  “On day one almost all of our keepers came on ned rigs, floating them on the edge of the current from the dam, but our big bites came on a variety of bigger craw-style soft plastics. The first tournament day acted as our real practice for day two up on Wilson and we knew going into day two that if we fished clean we would easily have between 18-20lbs.”

The stars aligned on Day 2 for the UB Bassmaster anglers as the morning bite at the tailrace was on fire.  Ocwieja said that they caught three to four-pound class fish one after the other for about a three-hour span.  That morning flurry yielded them 18.51 pounds of Wilson Lake bass.  Combined with their Day 1 total, Austin & Anthony finished the event in 5th Place, tallying 33.00 pounds of bass.

Back in March members of the University at Buffalo fishing team had made the trek to Paris, TN and Kentucky Lake to compete in the Bass Pro Shops Big Bass Bash presented Berkley.  Due to the Coronavirus pandemic, the event had to be rescheduled to September of this year.  Having already made the journey from up north, the anglers decided to make the most of their time in the region.  They decided to make their way down to Florence, AL for a few days near the end of the trip to sneak in some pre-practice on the tournament waters.  That decision proved crucial as Austin & Anthony were able to secure the highest finish of any UB Bassmaster anglers at the BoatUS Collegiate Bass Fishing Championship presented by Bass Pro Shops.

“Our finish was also a great way to end the year because it was Austin’s last year fishing the tournament in Florence because he is a recent graduate,” stated Anthony.  “We also want to highlight that graphing at the tailwater of the Wheeler dam is almost impossible because of the changing currents. Garmin Panoptix LiveScope played a huge role once we were on the trolling motor because it allowed us to position the boat slightly downstream from the schooling bass to cast up and drag our baits through the fish every time. Our constant precise casts allowed us to get bit.”