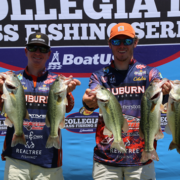 SAN ANTONIO, TX (6/20/2020) – “To us, it means everything to finish in the Top 5 nationally,” said Will Phillips from Auburn University.  “As a self-funded, non-scholarship team, we take great pride in competing with some of the top schools in the nation. Auburn has always had a great history in this sport, and to be able to maintain that reputation is excellent for our team moving forward.” 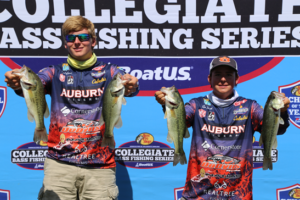 the final event of the year in 4th overall but faltered ever so slightly at the Championship.  As a team, they only earned 1,555 points for their efforts at Pickwick Lake.  Though it’s not the finish they hoped for, the anglers from Auburn are proud of the season they were able to put together.

“Obviously we were gunning for 3rd, as we were less than 100 points behind Adrian, but it’s honestly such an honor just finishing in the Top 5 against such stout competition,” noted Logan Parks.  “…we really can’t complain about where we finished, we are excited to see what next year has in store for us. We are shooting for number one.”

Auburn has already turned their focus towards next season.  “I believe our team’s finish in fifth place in School of the Year is pretty strong, but as competitive anglers, it also pushes us to have the desire to climb higher in the points next year and try to win School of the Year,” added Lucas Lindsay.  The anglers from the state of Alabama have never won the Bass Pro Shops School of the Year presented by Abu Garcia.  However, year in and year out, they are extremely competitive in the race to be named college fishing’s best team.  In 2020-2021, they are striving for that number one spot.  “To be able to compete and have the chance to win SOY was a big deal to our team, and to be able to come out of this season with a top 5 finish is extraordinary. Our team is looking forward to getting after it again next year and taking home the SOY trophy,” concluded Phillips.