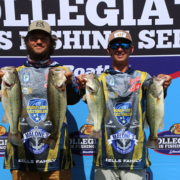 SAN ANTONIO, TX (6/18/2020) – One of the most consistent teams in the history of collegiate bass fishing is Murray State University.  In six of the past seven seasons prior to 2019-2020, Murray has finished in the Top 5 for the Bass Pro Shops School of the Year presented by Abu Garcia.  The club was able to extend that streak to seven as they finished the year ranked the fourth best school in the nation.

“To finish 4th in the School of the Year race means a lot to our team. We all have a passion for this sport, and to make this our seventh Top 5 finish in the past eight seasons shows that we are always pushing to be on top,” said team member Jacob Autry.  “We knew it was going to take a lot to move us into 1st in School of the Year points coming into the Championship, so we went into it with level heads and determination.” 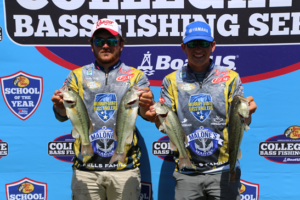 finishing teams ended the event in 12th and 26th.  Those two Top 30 performances earned Murray State 2,285 points at the Championship.  For the season, their final points total was 12,825, good enough to leapfrog Auburn University for that fourth position.

“On the water, we just fished. We never worried or even thought about the School of the Year race or where we placed in the tournament until we came into weigh-in,” Autry added.  “We swung for the fences and fell a little short but we’ll be coming for the top spot hard next year.”

As a part of this Top 5 School of the Year feature series, we are asking each angler to describe the chemistry and bond amongst the anglers on their respective team.  Each bass team is like a small family.  These anglers travel the country together all year long and build unbreakable bonds that last a lifetime.  Here is Jacob’s response to that exact question: “Being a part of this team feels like being part of a big family. Everybody gets along and everybody is always willing to go out of their way to help each other. I wouldn’t want to be fishing anywhere but Murray State!”