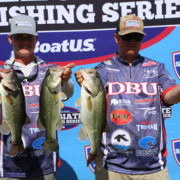 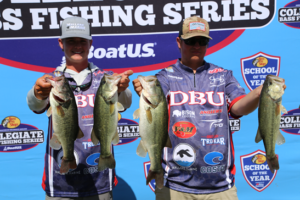 Bass Pro Shops in 2nd place.  The two anglers representing Dallas Baptist University weighed in a total of 19.08 pounds of Pickwick Lake bass on Day 1 of competition.  Entering Day 2, they were less than one pound behind the leaders.

When the scales closed on Day 2, Harris & Rhodes came up a little short but managed to claim fourth place overall.  Working hydrilla around the Kogers Island area, they amassed a two-day total of 33.66 pounds.  They also earned the $500 Garmin Tournament Rewards contingency for being the highest-placing Garmin user at the event. 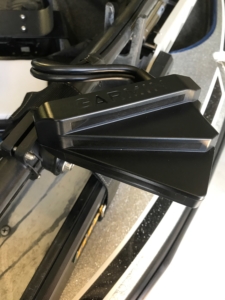 “One of the biggest tools we used was Garmin Panoptix. My partner, Mark, had just put it on his boat days before the tournament,” noted Rhodes.  The definition in the images from Panoptix LiveScope helped them to locate fish relating to grass edges.  “We utilized the Garmin LiveScope to find the hard lines in the hydrilla and where the hydrilla was the thickest,” explained Harris.  “This seemed to be where the fish were grouped up the most.”

When people think of Pickwick Lake and electronics during the summer months, the first thing that pops in their mind is ‘ledge fishing.’  Graphing offshore structure and irregularities out along the channel of the Tennessee River is a textbook summer pattern for Pickwick Lake.  Thanks to the versatility of Panoptix LiveScope, Harris & Rhodes were able to scan grass flats to find success.   “We thought it would be valuable for the ledges coming in, but we used it differently this week. We used it to find the hard grass lines and the thickest grass we could find,” added Rhodes.  “Using the Panoptix helped us not waste time and enabled us to fish the right areas every time.”

To find out more about Garmin Tournament Rewards, follow this link.