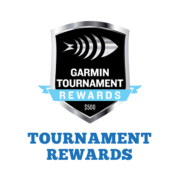 To be eligible for the $500 cash prize, an angler must be the highest placing Garmin user at a qualifying Garmin-sanctioned event. The boat must be equipped with 1 or more Garmin fixed-mounted marine electronics or trolling motor.  Qualifying electronics include Garmin GPS units, fishfinders, combo units, chartplotters and trolling motors.  See complete rules and list of qualifying events at Garmin.com/tournaments.

Except where prohibited by law, each highest-placing angler agrees that: (a) any and all disputes, claims and causes of action arising out of, or connected with, the Garmin Tournament Rewards shall be resolved individually, without resort to any form of class action, and exclusively by the appropriate court located in the State of Kansas; and (b) highest-placing angler waives the right to claim any damages whatsoever, including, but not limited to, punitive, consequential, direct, or indirect damages, including attorney’s fees. All issues and questions concerning the construction, validity, interpretation and enforceability of these Official Rules, winner’s rights and obligations, or the rights and obligations of Garmin in connection with the Garmin Tournament Rewards, shall be governed by, and construed in accordance with, the laws of the State of Kansas.