Anglers from fifty-seven universities walked into the Hughes Center in Russellville, Arkansas this evening to check into the 2016 Collegiate Bass Fishing Open Presented by Cabela’s. Upon entering, the Cabela’s Collegiate Bass Fishing Series staff saw quite a few happy faces walk through the door, partly because of the chance to get some free food, but mainly because their practice day was over and they were in dry clothes. 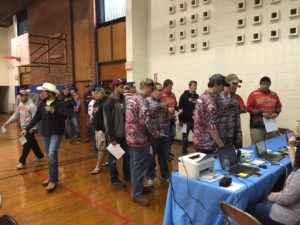 With a hopeful good two days of fishing ahead with hundreds of Cabela’s School of the Year points up for grabs, anglers were able to enjoy free barbecue, fifty percent off of all Buff® Headwear products, as many Sqwincher packets as their hands could hold, and one of Berkley’s new hard baits, the Berkley Digger.

After hearing how many anglers were fishing the miles of rip rap that Lake Dardanelle has to offer, Berkley Marketing Director, Andrew Marks had an idea to get these anglers an opportunity to earn an additional $1,000 in Berkley product while fishing with the new Berkley Digger or any of the new Berkley hard baits. 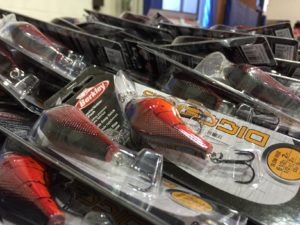 “After listening to the anglers talk about how excited they were about the bait, I needed to get them to throw the bait, because these anglers need a game plan,” said Marks. “We give away product at every tournament, but the challenge is getting them to throw the product. In order to do that, Berkley is going to give the winner of the Collegiate Bass Fishing Open $500 in product if they win from using either the Berkley Digger or any of the new Berkley hard baits. If the winner is also throwing those Berkley hard baits on an Abu Garcia reel, we’ll raise the prize to $1,000 in product.”

Since the excitement of the new incentive turned almost every head in the Hughes Center, Marks added that this program might stick around for the Cabela’s Collegiate Bass Fishing Series throughout the 2017 season.

“They were so excited about the new baits so I figured this would be a great way to promote them. Hearing the excitement from all the anglers after the announcement of the incentive definitely gives us an idea for the BoatUS Collegiate Bass Fishing Championship Presented by Cabela’s in May.”

To view the entire lineup of the new Berkley hard baits, visit www.berkley-fishing.com.

After the angler check-in, anglers headed back to their hotels to rig one last rod with their new Berkley Digger. With full stomachs, anglers look forward to the first morning of the 2016 Collegiate Bass Fishing Open Presented by Cabela’s on Lake Dardanelle out of Russellville, Arkansas starting at safe light. For live updates, check out the From the Water Blog Powered by Cabela’s at the link below!

The University of North Alabama Takes Big Lead on Day 1 of the Collegiate Bass...
Scroll to top