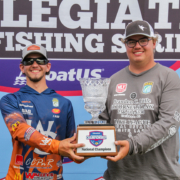 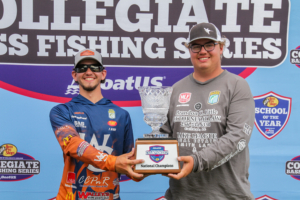 FLORENCE, AL (May 27, 2022) – The 2022 BoatUS Collegiate Bass Fishing Championship presented by Bass Pro Shops is in the books.  The Association of Collegiate Anglers’ 17th annual National Championship awarded $30,000 in prizes and contingencies, crowned a National Champion, and named a number one team in the Bass Pro Shops School of the Year presented by Abu Garcia.  Bryar Chambers and Clent Blackwood from Wallace State take top honors with 46.91 pounds.  Auburn University anglers Logan Parks and Tucker Smith finish in 2nd place, and Brock Bila and Dylan Chambers of Drury University wind up in 3rd. 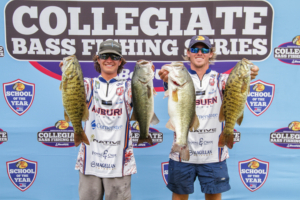 Hundreds of college fishing’s most elite anglers competed for two days on the Tennessee River at Pickwick and Wilson Lakes.  The early summer months are some of the best times of the year to be out on this famed fishery.  Following the spring spawn, a majority of the bass population in Pickwick Lake migrates out to the deep water haunts and ledges located along the main river channel to feed up on shad and baitfish that wash by in the current.

During this year’s BoatUS Collegiate Bass Fishing Championship presented by Bass Pro Shops, anglers scanned and casted to those ledges in search of the winning fish.  Chambers and Blackwood from Wallace State found the winning spot that produced 46.91 pounds of bass over two days.  The team located a spot near the Pickwick Dam that yielded the Overall Big Bass of the event, as well as nine other key bites that led Chambers and Blackwood to become the 2022 National Champions. 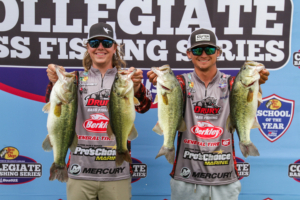 Along with the $5,000 cash prize that is awarded to 1st place, the Wallace State anglers claimed the $500 Garmin Tournament Rewards and a Power-Pole certificate for Overall Big Bass Honors.  Chambers and Blackwood’s prize winnings total over $6,500. 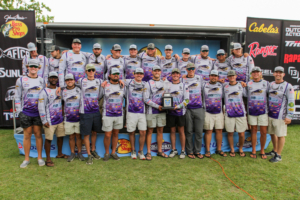