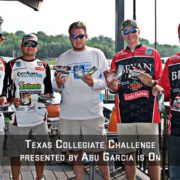 Registration is in the books for the third major televised event of the 2017 Cabela’s Collegiate Bass Fishing Series – the Texas Collegiate Challenge presented by Abu Garcia. Anglers were greeted to a dinner provided by the Denison Area Chamber of Commerce and free sponsor product.  “It is always a great treat to come to the registration and see all of your friends from around the country. Then to top it off we get such a great dinner; it really makes it a special deal,” said Quinn Fowler from Kansas State University.
Anglers also got to stock up on a great gift selection of line, hardbaits, and soft plastics from Berkley Fishing. “The Cabela’s Collegiate Bass Fishing Series always has a great registration. Not only do we get a nice meal we also get to leave with a handful of baits to use on the water,” said Texas Tech University bass angler, Tanner Best.
The Texas Collegiate Challenge presented by Abu Garcia is a double points event in the Cabela’s School of the Year Presented by Abu Garcia race. The top four current teams in the school of the year race are all in attendance and will be competing to gain valuable points to add to their team total. Current Cabela’s School of the Year leaders Bryan College had this to say about the event this weekend and leading school of the year, “We have worked so hard as a team this year to achieve the number one ranking. Our goal at the start of the years was to win School of the Year and being in first with a couple tournaments left is a huge blessing.” Nathan Bell, angler for Bryan College, continued, “We came to this tournament even though it was a 14 hour drive because we felt it would give us a better chance to defend our ranking and win School of the Year.” Second place University of North Alabama, third place University of Tennessee-Knoxville, and forth place Murrary State all have anglers here competing at this event.  We will have coverage from on-the-water following these teams and many more to bring you all the action during the television airing of this event.
Follow our Live Blog presented by Ranger Boats and Yamaha for on-the-water latest updates! Make sure to tune in for our Live Weigh-in presented by Cabela’s and Abu Garcia tomorrow starting at 3pm.
https://www.collegiatebasschampionship.com/wp-content/uploads/2017/04/image017.jpg 552 919 Garret Brain https://www.collegiatebasschampionship.com/wp-content/uploads/2018/11/2019-Bass-Pro-Shops-Collegiate-Bass-Fishing-Series-Association-of-Collegiate-Anglers-Boat-US-2-300x179.png Garret Brain2017-04-29 13:21:432018-05-09 15:15:18Texas Collegiate Challenge presented by Abu Garcia Kicks Off with Registration
0 replies