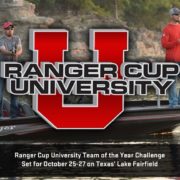 FLIPPIN, ARK (October 10, 2017) Collegiate fishing teams from Kansas State University and the University of North Alabama will square off at the 2017 Ranger Cup University Team of the Year Challenge October 25-27 on Texas’ Lake Fairfield. This year’s competition is unique in that it is the first time in the program’s history where both qualifiers are the current national champions from their respective trails. This made-for-TV competition will be filmed and televised nationally on “Americana Outdoors” later this year.

Kansas State University anglers Travis Blenn and Kyle Aslop qualified for the event by winning the YETI FLW College Fishing National Championship on Wheeler Lake. Sloan Pennington and Hunter McCarty, from the University of North Alabama, qualified by winning the BoatUS Collegiate Bass Fishing Championship presented by Cabela’s at Pickwick Lake. Both teams will receive a grand-prize package that includes travel, lodging, and meals, as well as the opportunity to compete for cash and prizes from fully rigged Ranger boats. The winning team will be awarded $2,000.

“We’ve watched this on TV for years and it is a great format,” said Pennington. “It seems more challenging with just one other boat out there. Fishing these collegiate tournaments gets your name out there, especially having a televised event with only two teams. It promotes the guys in both boats unlike any other tournament. It’s an awesome opportunity.”

“I am still in shock that we won,” said Aslop of his team’s qualifying performance on Wheeler Lake. “I have hung out with the guys from UNA and they are a great bunch of anglers. I can’t wait to get down there with them and have a blast. This is an incredible opportunity for us. It’s a dream come true.”

Both collegiate teams will compete out of a brand new Ranger RT198 outfitted with Garmin EchoMap units and Yamaha outboards. Each fish over 14 inches will be considered legal. All legal fish will be weighed and released with the total weight determining the Ranger Cup University Team of the Year.

Modeled after Ranger Cup, the most lucrative contingency rewards in the industry, Ranger Cup University is the first program designed exclusively for collegiate anglers and is open to those fishing in either FLW- or BoatUS-affiliated competitions. Sign up is free, regardless of which brand of boat the anglers own. To remain qualified in the program, anglers need only adhere to clothing and logo requirements. As part of the Ranger Cup University program, participants will be able to receive specially discounted tournament gear through Gemini Custom Apparel, with no artwork or set-up fees. Through this partnership, Ranger Cup University anglers can purchase fully customized tournament jerseys for as low as $48.

About Ranger Boats
Headquartered in Flippin, Ark., Ranger Boats is the nation’s premier manufacturer of legendary fiberglass and aluminum fishing boats, with acclaimed models and series in the bass, multi-species, fish ‘n play, saltwater, waterfowl utility and pontoon boat segments. Founded in 1968 by Forrest L. Wood, Ranger Boats continues its commitment to building the highest-quality, strongest-performing boats on the water. For more information, go to RangerBoats.com, RangerAluminum.com or RangerPontoons.com.

For complete program guidelines and details on Ranger Cup University, including payout, clothing requirements and informational videos go online to: