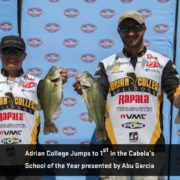 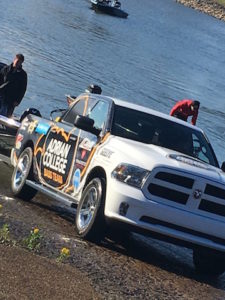 Adrian College has overtaken Bethel University for the lead in the Cabela’s School of the Year presented by Abu Garcia race after earning back to back victories at FLW Northern events on Lake Erie and Chautauqua Lake.   The Adrian College team has been well represented this season and is poised to make a run at this year’s title.

“We have had a phenomenal summer and we are in a great spot heading into our off season. With the high level of competition that we will face as we head south for the remainder of the season, we know we have very little room for error. Taking care of business in the FLW Northern conference (finishing 3rd, 1st, & 1st) is a huge confidence booster for our team. Being 1st in the SOY standings right now simply means we have made the most of the opportunities we have had thus far,” said Adrian College Coach Seth Borton.

Chase Serafin and Cody Batterson are the two most recent team members to earn Cabela’s School of the Year points at the FLW Northern event on Lake Erie for Adrian College.  These two were able to catch a limit of 17-2 pounds. This was an all-around tough event for all the teams with heavy winds causing anglers to have to make adjustments in order to be able to catch keepers during the event.

“We have been in this spot before. It’s a long season and we are going to have our work cut out for us in order to stay in this spot the remainder of the season. We now have Juniors and Seniors who have some experience on certain tournament waters and I think that really helps the learning curve for the younger guys,” commented Chase Serafin, Adrian College. 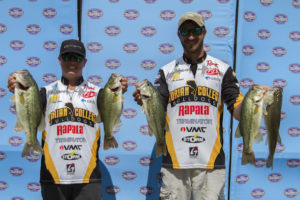 The team of Jarrett Martin and Zachary Graham was able to win the FLW event on Chautauqua Lake by bringing in a very impressive limit of bass that tipped the scales at 16-3 pounds. This team may be the hottest team in the country after racking up two more top-five finishes in the FLW Northern events. The team finished third at the Smith Mountain Lake event and was able to bring home fourth at the Lake Erie recently as well.

“This is now my senior year and I’ve been here since the first year of the program. I’m proud of the progress we have made and the solid foundation we have been slowly building on. I would do anything to see us be able to win SOY in just our fourth year as a program. As a senior, you always want to go out on top and this would be the icing on the cake,” said Jarrett Martin, Adrian College.

Other recent top finishes by Adrian College include the Bassmaster Wild Card and FLW Championship.   At the Wild Card event, the team of Chase Serafin and Nick Czajka finished in 40th place; while the team of Dalton Breckel and Jeff Morton finished in 35th place at the FLW Championship. A total of eight different team members have contributed points this season towards the Cabela’s School of the Year presented by Abu Garcia title. 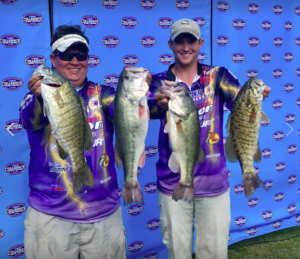 Bethel University did not fish any events this past weekend, opening the door for Adrian College to overtake them for first place in the Cabela’s School of the Year race. The last event Bethel University competed in was the 2017 McKendree University Fall Invitational where the team of James Jerding and Brad Ableman came in second place with a five-fish limit weighing 13 pounds and bringing home the big bass honors with a 5.47-pound beauty. Bethel University had a total of ten teams compete in the Fall Invitational, all trying to help earn Cabela’s School of the Year points.  So far, this season seven different teams of anglers from Bethel have earned points on the water which shows how deep their program is this year.

Moving up one spot to knock Louisiana State University – Shreveport out of the Top 3 is West Virginia University after fishing their fifth Cabela’s School of the Year presented by Abu Garcia event this season.  West Virginia University has had a busy fall competing in all these events and has had four different teams earn the school points — showing off the number of good anglers in their program. 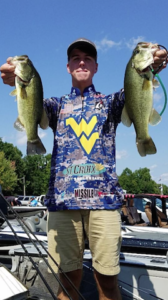 “Next for the team is to continue fishing. While all of our major events are pretty much over until the spring of 2018, we will still be on the water every chance we get trying to better ourselves as anglers. We have two very determined teams that have begun to prepare for the FLW National Championship on the Red River so we are very excited for that. With this being our “offseason,” we will use this time to promote the sport of bass fishing through service projects and interacting with the community, ”said Branden Newcome, West Virginia University Fishing Team President.

The team of Nolan Minor and Casey Lanier have contributed points from two events this season by placing 6th at the BASS Wild Card Event and 44th at the BASS Championship. Finishing with an impressive top 10 at the FLW Northern event on Chautauqua Lake, Michael Shughart and Branden Newcome finished in 10th place. In the final FLW Northern event of the year, the team of Thomas Raines and John Hendrickson were able to battle harsh weather to finish in 65th place, and the final team to help earn points for West Virginia University was Kirkland Price and Bailey Gordan placing 23rd at the FLW Championship.

Here is a look at the standing for the current top 20 in the Cabela’s School of the Year Presented by Abu Garcia:

For the complete Cabela’s School of the Year presented by Abu Garcia standings click here: https://www.collegiatebasschampionship.com/wp-content/uploads/2017/05/2017-2018-ACA-SOY-Standings-10-9-2017.pdf

For more information on the Cabela’s School of the Year presented by Abu Garcia visit: https://www.collegiatebasschampionship.com/cabelas-school-of-the-year-program-description/

Ranger Cup University Team of the Year Challenge Set for October 25-27 on Texas’...
Scroll to top