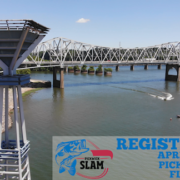 The Pickwick Slam is scheduled to take place on Pickwick Lake in Florence, AL on April 10-11, 2021

SAN ANTONIO, TX (January 12, 2021) –  Registration is now open for the 2021 Pickwick Slam on Pickwick Lake in Florence, AL.  The Pickwick Slam is scheduled to take place on April 10-11, 2021, and will be the final major event of the season on the Bass Pro Shops Collegiate Bass Fishing Series prior to the year-end Championship in May.  Anglers will be competing for thousands of dollars in prizes & contingencies, as well as double points towards the Bass Pro Shops School of the Year presented by Abu Garcia.

The 2021 Pickwick Slam will mark the first time that the ACA has hosted an event on Pickwick Lake during the springtime since the inaugural Big Bass Bash in 2011.  Located along the Tennessee River in Florence, AL, both Pickwick & Wilson Lake are world-renowned summertime offshore fisheries.  During the summer, it often takes upwards of 20 pounds per day to win a bass tournament on these heralded waters.  Visiting this fishery during the spring creates a new landscape for this event, as well as creates the possibility for even heavier weights at weigh-in.

“Pickwick and Wilson Lakes are two of the most well-known lakes in not only the state of Alabama but across the nation,” said Wade Middleton, Director of the ACA and President of CarecoTV.  “We’ve become accustomed to being there during the summer, but I am really intrigued to see just how well they can catch them in early April.  These two fisheries are full of shallow cover, and I think the college anglers will have a field day catching fish at the Pickwick Slam.”

This particular event will be a standard two-day, traditional five-bass limit event.  Competitors will be permitted to fish in two angler pairings representing their respective schools.  The team with the highest two-day cumulative weight will be the winners of the 2021 Pickwick Slam.  School of the Year points will be awarded to the Top 100 teams in the final standings.  1st place will earn 1,000 points, and each school receives points for their highest two finishing teams in the Top 100.