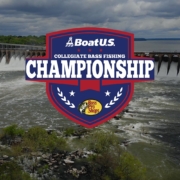 SAN ANTONIO, TX (May 18, 2022) – The 2022 BoatUS Collegiate Bass Fishing Championship presented by Bass Pro Shops is set to take place in just over a week, during May 26th –  27th, in Florence, AL.  Both Pickwick and Wilson Lakes are official tournament waters for the longest consecutive running collegiate National Championship bass fishing tournament.  The fertile waters of these two world-class fisheries along the Tennessee River will present a phenomenal playing field for 400 of the nation’s top collegiate anglers over the course of two full days of tournament competition.

Pickwick Lake is comprised of approximately 47,500 acres of water surface spanning 50 miles from the Wilson Dam in Florence, AL to the Pickwick Dam on the opposite end of the lake.  Lining the 490 miles of shoreline along Pickwick Lake is abundant fish catching habitat including flooded wood cover, various vegetation, as well as riprap and bluff rock banks.

Along with the expansive shoreline cover, Pickwick Lake is most-known for its fertile offshore structure and ledges littered across the fishery.  These offshore fish-holding features include humps, ditches, creek channels, river bends, and ledges.  As the river current rolls through these areas, bass will position on key spots to grab an easy meal.

It is very common during this time of the year on Pickwick Lake to find large schools of bass positioned out on these offshore honey holes.  Following the springtime spawn, over the past several months, a majority of the Pickwick Lake bass population migrates out deep to find cooler waters and feed up on baitfish and shad for the next several months.

Selecting the right spot, tying on the secret bait, and paying attention to electronics will be the key formula to success during the BoatUS Collegiate Bass Fishing Championship presented by Bass Pro Shops.  Look for anglers to be paying close attention to their Garmin Panoptix LiveScope as they cast a variety of lures including deep-diving crankbaits, large soft plastics, jigs, and spoons to deep offshore structure.

Anglers will also be able to lock up to Wilson Lake during official tournament competition.  The ACA has informed registered anglers about the current status of locking up to Wilson Lake during the event.  Wilson Lake is considered part of the official tournament waters, and anglers will have the option to lock during both days of tournament competition.  Recent construction and repairs to the Wilson Dam have altered the locking schedule for recreational traffic making Wilson a gamble for many of the anglers in the event.  Please reference this statement from the U.S. Army Corps of Engineers Nashville District about the current plan for locking to Wilson Lake.

Each year, a significant number of boats competing in the 200-boat field opt to lock up to Wilson Lake during the event.  The shallow waters of Wilson Lake offer out of town anglers that aren’t as comfortable fishing offshore ledges with the chance to go fish their strengths across a variety of different fish holding areas.

On Wilson Lake you will find anglers throwing a combination of topwaters, crankbaits, and flipping soft plastics to shallow cover.

Weather isn’t expected to play a major factor in how the bass position and bite throughout tournament competition, but it will impact the anglers out on the water during this early summer event.  Slightly below average high temperatures will be in play throughout Championship Week and during tournament competition.  A cold front will blow into the area on Sunday, dropping high temperatures by 15 degrees.  A slight chance of rain is in the forecast towards the end of the week.

We are looking forward to a great end to the 2021-22 season at Pickwick Lake in Florence, AL for the 2022 BoatUS Collegiate Bass Fishing Championship presented by Bass Pro Shops on May 26th – 27th!   You can watch the weigh in’s live on www. outdooraction.com and you can follow action all week long on the blog at www.collegiatebasschampionship.com.