With the start of Day 2 of the Collegiate Bass Fishing Open Presented by Cabela’s almost mirroring the morning of Day 1, the general consensus from anglers across the field felt that today’s fishing conditions would just be getting better for those targeting pre-spawn bass. The University of North Alabama encountered ideal conditions for their pre-spawn pattern as they were able to weigh in a total of 42.76lbs to take home the win on Lake Dardanelle in Russellville, Arkansas.

Continuing off of their success from Day 1, the University of North Alabama Bass Team of Caleb Dennis, Sloan Pennington, Triston Crowden and Makenzie Henson kept a swim jig in their hands all day targeting creek channels that were less than two miles away from Lake Dardanelle State Park.

“We started throwing a black and blue swim jig through grass around channel swings this morning,” said Crowder. “As the day went on we followed the fish up to about two to three feet of water and the quality of fish got better too.”

Dennis added that “this was an area in Illinois Bayou that wasn’t far from the ramp and we actually didn’t practice in that area too much, but it paid off today!”

The team gained almost a ten pound lead over the second place team, but to the University of North Alabama Bass Team, the weight isn’t as important as the Cabela’s School of the Year points they will be receiving from their win. When asked about their push for the prestigious title, the four man team all had the same reaction.

“All of our boats did really well so we are hoping that this will at least put us back in the top 3 in School of the Year, but hopefully it gets us even higher,” stated Henson. “We want to get as many points as possible and the double points events are key.”

Pennington and Crowder both added that the win today was badly needed for the club as they want to focus all of their tournament efforts toward the single goal of winning their third consecutive Cabela’s School of the Year Title.

Anchored with the Big Bass of the entire two day event weighing 7.42lbs, the Tarleton State University team of Zach Montalvo, Justin Seeton, Stetson Overton and Dakota Ebare weighed in a total of 33.34lbs to take second place in the 2016 Collegiate Open. 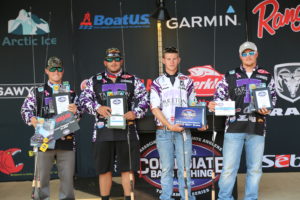 “We knew it was going to be tough coming into this event because of the complete opposite conditions in the tournament than in practice,” said Seeton. “Overall it actually helped us though because we stuck to what we knew and fished reaction baits around the hot water core and the waterfall. I’m just thankful that we were able to work together and I can’t thank Dakota and Zach enough because they were the backbone of this team this week.”

“At the end of the day yesterday we caught three pounder on a reaction bait in some really muddy water, so we knew that if we could catch them in muddy water, they would for sure be in the clearer water of Piney Creek. This morning we started in Piney fishing some rocky banks and we caught a five pounder almost instantly which is when we knew we were onto something,” stated Ebare.

Dakota Ebare then landed a 7.42lb big bass on a watermelon red chatterbait not long after the team figured out their new pattern adding to the team’s total and earning him $200 in Cabela’s gift cards, a Mustang Lifejacket and a new Cabela’s Collegiate Bass Fishing Series Buff®.

“We’re super excited about our teamwork throughout the event and I’m sure this is going to bump us up in the Cabela’s School of the Year rankings,” added Ebare.

Weighing in four hundredths of a pound less than Tarleton State University, the Louisiana State University – Baton Rouge two-man-team of Levi Sharp and Dakota Sparks weighed in a total of 33.31lbs to take third place in the 2016 Collegiate Bass Fishing Open Presented by Cabela’s. 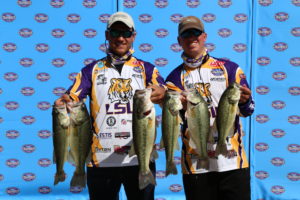 With the weather once again being a major factor in where the team would fish, Sparks and Sharp’s practice yielded them a wealth of knowledge of what to fish and where to fish. The team ran thirty-five miles north to a creek that set up with the conditions most suited to how the team was comfortable technique-wise.

“Watching the weather, we knew it would be cold this morning,” said Sharp. “ During practice we noticed fish moving up to spawn so we knew we needed the water to warm up before the fish would become active and start eating. We figured that any fish we caught early would be a bonus fish, but once the water warmed up, it was perfect.”

“After our thirty-five miles north into an oxbow off of the river, we started flipping shallow cover and laydowns,” added Sparks. “Later in the day we were flipping heavy cover with braided line and speed craws and creature baits.”

Overall the team fished the event very clean, but did run into a costly blunder that could have significantly helped the Louisiana team.

“We broke one off that was about four pounds that would’ve put us easily into second, but it wouldn’t have even touched UNA,” said Sharp, “but getting third in this event is definitely going to boost us significantly in the Cabela’s School of the Year Rankings. As a whole, we are pretty satisfied with our performances so far as this is our second top five finish this year!”

The remaining top ten in the Collegiate Bass Fishing Open Presented by Cabela’s are as follows: