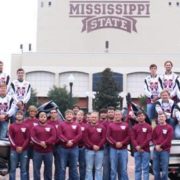 SAN ANTONIO, Texas – Mississippi State gained over 830 points to now take a commanding twenty point lead in the Cabela’s School of the Year rankings above the second place, University of Alabama and third place, Bethel University. Mississippi State has been a leading force in the Cabela’s School of the Year race since the program’s inception and looks to maintain their lead heading into the heart of the collegiate bass fishing season.

“The Big Bass Bash along with the other ACA tournaments are very influential as they’re double points,” said Marty. “Our team was blessed enough and skilled enough to find two quality fish to weigh in during that tournament that led our team to the top of the rankings right now.”

The Mississippi State Bass Team has had a strong season thus far and explained how strategy comes into play when planning a competitive season with the Cabela’s School of the Year Title in mind.

“We started out really strong. Fishing the small events are critical to gaining points early in the year and we gained points in some of the bigger events, but now we just jumped a lot with over 800 points. This has just really shown how our season is getting stronger at each event. Right now I can definitely say that the top twenty teams are stacked and we need to keep our momentum going through June,” said Marty.

The Mississippi State Senior added that the competition is once again keeping the team on their toes at all times. Marty knows that when you’re at the top of the Cabela’s School of the Year rankings, you become a target.

“I think the competition level is high as usual and like I said, we need to keep our momentum up. I think as the year goes on as well, we’ll see a lot more northern schools start their tournament schedules and they’ll become another factor in the rankings. I know that the University of Wisconsin Steven’s Point is a really good team and they’re usually in the top fifteen each year and they have a lot of tournaments coming up that will gain a lot of points, but that’s the same for all of those northern schools,” added Marty.

With one event of the Cabela’s Collegiate Bass Fishing Series already in the books, Marty recognizes the events in the team’s schedule that will offer significant Cabela’s School of the Year points.

“Without a doubt the Collegiate Open and the BoatUS National Championship will be key to maintaining our success due to the double points factor,” said Marty. “Doing well in all the circuits is key, but doing well in the ACA events is absolutely critical.” 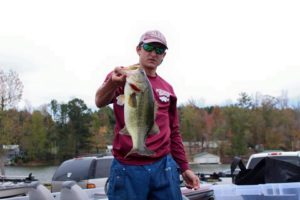 Looking towards the end of the season, Marty’s goals for the club are immense but definitely not unattainable by any means. As the senior’s last season, maintaining the Cabela’s School of the Year lead is just one goal that the senior has for the club.

“To win the Cabela’s School of the Year Title would mean everything,” said Marty. “We’ve been pushing for four years now. There are a lot of Tennessee and Alabama schools that are really competitive and really good schools, but to top the whole field would really mean a lot to our club and would bring a lot of recognition to our program.”

“The majority of our funding, which comes from fundraising along with support from MSU, has allowed our club to become foundationally and financial stable,” added Marty. “Now in my last year though, I would sure like to win the National championship and the School of the Year!”

The remaining Top Ten of the Cabela’s School of the Year rankings are as follows: