SAN ANTONIO – Heading into the final stretch of the Cabela’s School of the Year race, it is McKendree University sitting on top of the rankings, closely followed by Murray State University in second and the University of Alabama in third. With less than two months left in the 2015-2016 race, teams will be making a major push at the last double points event of the season; the 2016 BoatUS Collegiate Bass Fishing Championship Presented by Cabela’s on Pickwick Lake.

McKendree University has climbed the ranks of the Cabela’s School of the Year race this year and plans to keep their first place standing throughout the remaining portion of the season. 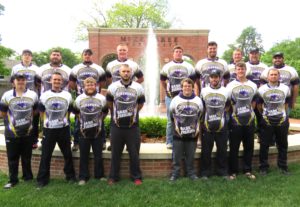 “I never thought that I would be fishing on a college fishing team that is this competitive and this motivated, and it’s awesome to be around a group of guys that shares the same passion that I have,” said McKendree University Junior, Austin Chapman. “ It’s awesome to see our hard work and dedication payoff at each event. We’ve improved every year too. In our first year as a club two years ago, we ended up in 20th, last year we finished in eighth, and now were in first. That’s something that feels insane to say, but I can’t stop smiling when I think about it.”

Though a young school, McKendree University has proven that they are a strong competitor throughout the nation by surpassing the 353 schools in the Cabela’s School of the Year program.

“Winning the Cabela’s School of the Year title would really establish McKendree’s program as a serious fishing school. Since we are a young club, people might just think that we’ve gotten lucky in the past, but now that we’ve had a string of success over the past few years, it shows that we can do well no matter what lake we get put on,” said Chapman. 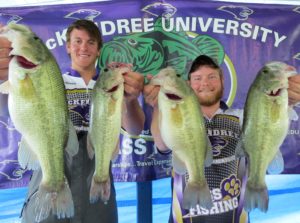 With only a week away from the 2016 BoatUS Collegiate Bass Fishing Championship Presented by Cabela’s, Chapman and the rest of the McKendree Team have been putting their all into their tournament research to be a top contender at the event.

“The championship is obviously a huge factor,” said Chapman. “Because it is a double points event, it’s definitely a big deal. It’s also down south, so there are a lot of southern schools that are used to that offshore style fishing, which Pickwick is known for, so we’re going to have to have a good finish to keep our position in the School of the Year race. We have other regional events, but no other event will be worth what this event is worth so this is definitely a key event. I’ve been putting in so much time researching the lake, watching videos, and studying maps to try and make sure that we have a good finish.”

Noting the lake’s recent tournament results, Chapman has made some keen observations as to what it will take to get his hand raised as the BoatUS Collegiate Bass Fishing Championship Presented by Cabela’s Champion.

“After the Costa Series and FLW Tour were out there, I except it to take close to fifty pounds if not more to win it. I expect it to be won offshore which is something that we’re not used to up north, but I’ve been doing a lot of research to make sure that this year will be better than last year,” said Chapman.

With official practice starting on the 22nd for the last double points event of the year, Chapman was chomping at the bit, ready to make the trip down to Florence, Alabama.

“I love the area. Everyone around Florence really welcomes the fishing community. I think Florence is a great host site made for a big event. I love how it’s a week-long event and how everyone tries their best to pull out all the stops for us and no other circuit does that, so it really means a lot and I’m looking forward to getting down there.”

Inside Their Heads: Championship Edition
Scroll to top