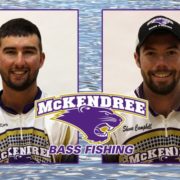 (LEBANON, Ill., Feb. 15)—Although the McKendree bass fishing team posted an 18th place overall finish at the Texas Lunker Challenge last weekend, the Bearcats’ program posted an even more important victory before the event was complete.

McKendree bass fishing team members Trevor McKinney and Shane Campbell helped thwart a potentially life-threatening situation early Sunday on Lake Sam Rayburn when they came to the aid of three fellow anglers from Louisiana State University whose boat suffered structural damage. With less-than-ideal conditions including cold temperatures and high winds, McKinney and Campbell worked quickly to get the trio from the slowly-sinking craft to safety.

“We were all battling the elements out there, but we saw they were in trouble and knew we needed to do something quick,” said McKinney, a sophomore at McKendree. “At that point, catching fish is not nearly as important as saving someone’s life.”

According to McKinney, he and Campbell were just finishing up at their first spot of the day and getting ready to head to another location when he first saw the LSU boat in distress. He though the boat was sitting lower than usual in the water, and then he saw the hands of his fellow anglers begin to wave back at them, signaling they were in distress.

McKinney and Campbell then made their way over to the LSU boat and as they approached the vessel, McKinney could see that the craft was taking on water. “We could see that the boat was filling up at a pretty decent rate, so we knew we had to get those guys, get their equipment and get them to safety,” said McKinney.

Mitchell Mayard, one of the three LSU team members helped by the McKendree anglers, said that while they were beginning their day on the water, he noticed their boat was idling and not moving.

“When we first saw we were having trouble, we knew we were close to an island, so we tried to get there to get out of harm’s way,” said Mayard. “It turned out that our hull split in two. Within 15-20 seconds, we had water up to our steering wheel. Fortunately, McKendree boat was within 40-50 yards of ours, and we were able to signal to them that we needed help. By the time they got to us, we had water up to our knees.”

With a water temperature hovering in the low 50s and and air temperature that measured 35 degrees, the teams worked together to transfer equipment from the LSU boat into the McKendree craft. The five anglers then made their way to a nearby dock, where the LSU team was able to call officials from Boat US for help in retrieving their boat. At the same time, McKinney and Campbell contacted McKendree head coach Jon Rinderer to alert him to the situation.

“I’m extremely proud of Trevor and Shane for their actions,” said Rinderer. “They put the needs of those who needed assistance ahead of theirs and helped avert a life-threatening situation. It shows the type of character and compassion that both Trevor and Shane have for others.”

Mayard and his teammates were also thankful that McKinney and Campbell were is such close proximity. “We’re so blessed that they were in the same area where we started our day,” said Mayard. “They stayed and helped, made sure we had everything out of our boat, and made sure we were able to get help. If they weren’t there, we would have been in some big trouble.”

The McKendree bass fishing team is scheduled to return to the water March 6-8 at the FLW Open on Kentucky Lake.