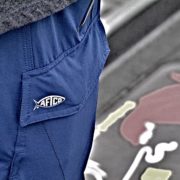 Today is the final day of the AFTCO Collegiate Bass Open here at Lake Dardanelle in Russellville, AR.  Anglers are launching their boats now leading up to the 7:00 AM take off.  We will have camera crews with several of the top teams from day one.  The live blog should have plenty of updates early and often this morning, so be sure to follow along.  Here is a look at the results from day one. 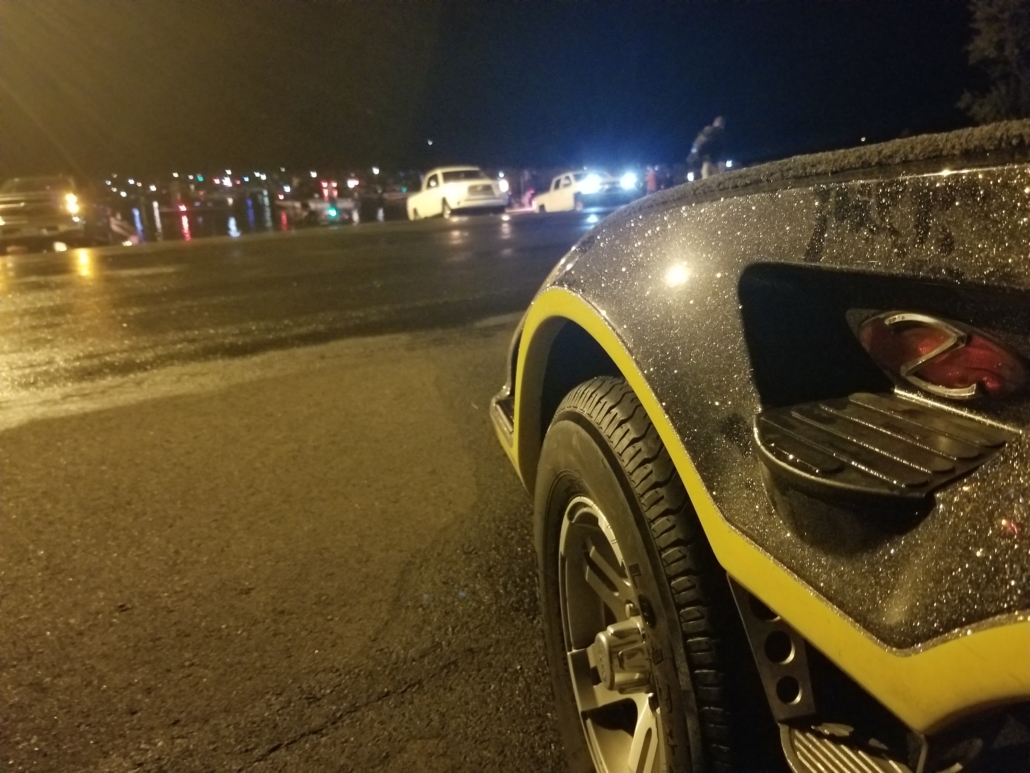 Trailers are filling up the parking lot and boats are continuing to launch here at the state park.  Weather will play a factor in today’s action.  The temperature right now is 56 degrees.  Highs for today are expected to reach just 58 degrees.  That’s a two degree warmup on the day.  Rain chances will also increase as the day goes on.  Beginning at noon there is a 45% chance for rain.  By 1:00 pm those chances will increase to 90%.  Rainfall totals are expected be around half an inch by the end of the day.  We will continue to keep an eye on the weather as the day progresses. 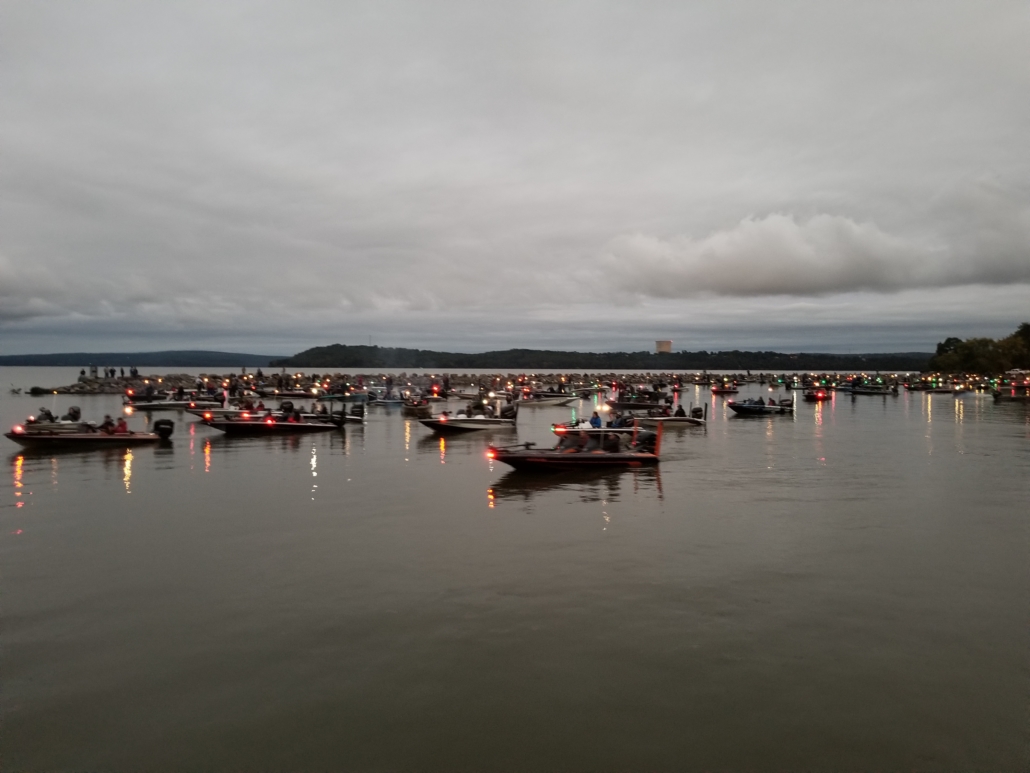 Day 2 is underway!  Boats are beginning to take to Lake Dardanelle in search of the winning fish.  The state park here offers an awesome setting to begin an event.  The bay near the ramp was packed this morning with nearly 400 collegiate anglers.  What a great view to start the day!  Now it’s time to start seeing some fish be caught! 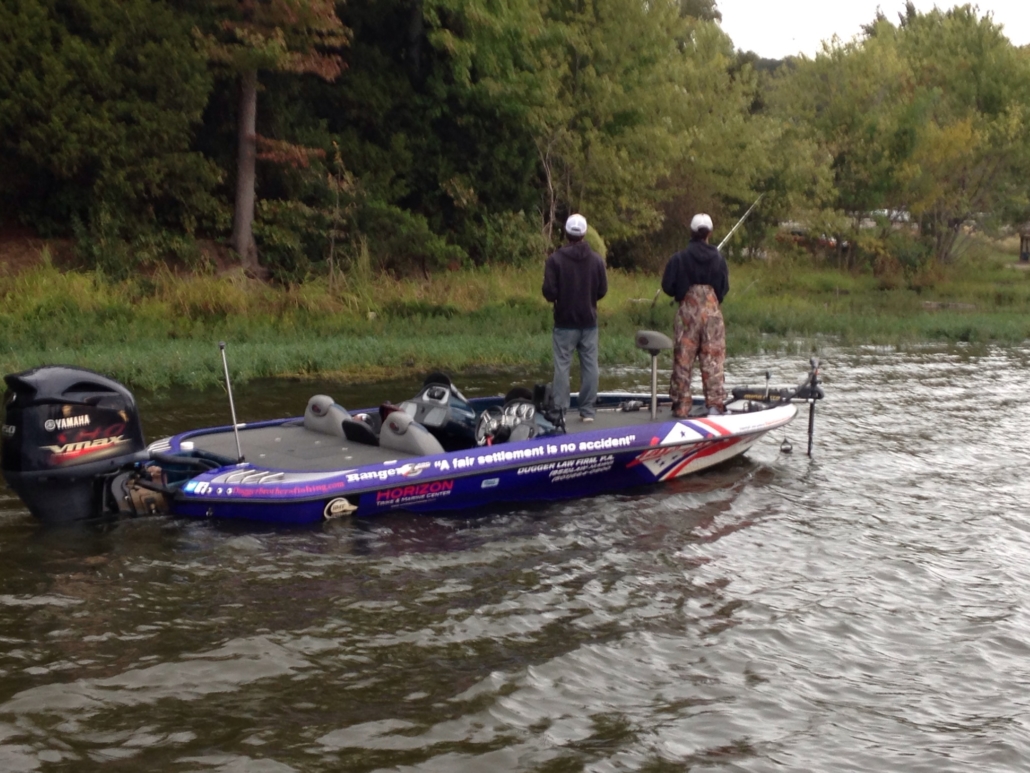 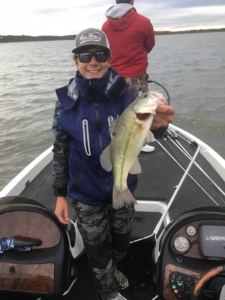 Griffin Heffington and Mason Cizek have one fish in the box.  The pair from Bryan College entered today in 3rd place.  They weighed in 15.10 lbs on day one to trail 1st by less than a pound.  This is a good start as they try to jump into the top spot. 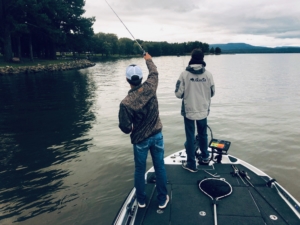 Here’s another update regarding a team in the top 3 starting today.  Cole Lamb and Tristan Weaver from Arkansas Tech University check in with one small keeper.  The local team from here in Russellville caught fish all day long yesterday, culling up to a final weight of 15.20 lbs. 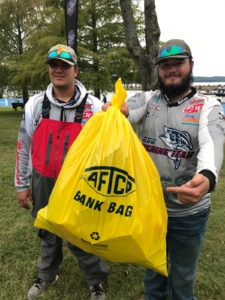 AFTCO is the title sponsor for this week’s event, the AFTCO Collegiate Bass Open.  One of their main initiatives as a company is conservation.  The AFTCO Bank Bag program is a key part of carrying out this mission.  Anglers take the yellow bags pictured above and walk the bank around the weigh-in site in site collecting trash and litter.  They can then turn in the bags full of trash to a staff member, and receive a $25 AFTCO gift card in return.  By cleaning up areas around the lake, we are able to have a positive impact on the environment and continue to preserve the resource for future generations.

Here at the state park right now the sun is trying to peak through the clouds.  At the beginning of the day forecasts suggested this was going to be a gloomy, wet day.  This is a pleasant surprise for the fair weather fans.  There is still a 100% chance of rain later today, but the estimated arrival time continues to get pushed back.

A string of updates just rolled in from off the water.

Day 1 leaders from Roger State University, Ty Crutchfield and Alec Murphy, only have two small fish in the box.  They are reporting the action to be slow.

The 2nd place group from Arkansas Tech University is still stuck on one small keeper.  Cole Lamb and Tristan Weaver are catching their fish in shallow grass, but not much size to show for their efforts so far. 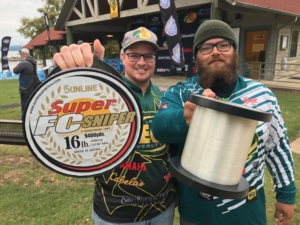 After weigh-in today there will be two giant spools of Sunline Super FC Sniper set up on the tournament trailer.  Each angler will be able to spool one reel with this line.  These have to be some of the biggest spools of line I’ve ever seen!  Each spool holds 5.34 miles worth of line.  A special thanks to Sunline for providing these for the anglers this week!

The race for Cabela’s School of the Year Presented by Abu Garcia is continuing to pick up as the season moves along.  Here is a look at the current top 10 in the SOY standings.  At Lake Dardanelle this week, not many of the teams represented in the top 10 are having great success.  In fact, Grand Valley State and Bethel University are the only ones to have a team in the top 10 following day 1.

This event provides the opportunity for a school to earn double points at the conclusion of tournament action.  That means if a school has at least two teams finish in the top 100 at the AFTCO Collegiate Open, they will earn points for the two highest finishing teams.  After day 1, Bethel University, compared to other teams in the top 20 of the SOY, is in the best position to capitalize on double points.  Their two highest placed teams are currently in 5th and 13th.

One of the better reports we’ve received this morning is from the Carson-Newman University team of Hunter Sales & Tristan Stalsworth.  The pair entered today in 4th place.  They have a limit with three solid keepers and are looking to cull out two of their fish. 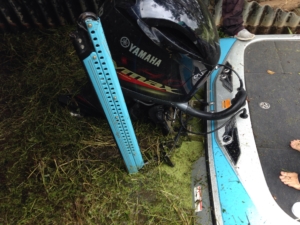 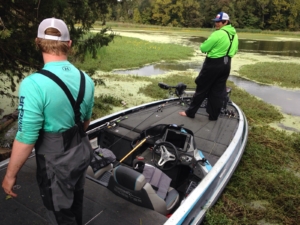 So far this morning we have received several calls from anglers getting stuck in the mud and backwater areas.  Everyone has managed to free their boat from those areas, and are safe.  It is interesting that these teams are working to get into some of these backwaters.  With a tougher bite, being able to get to areas that have not received much pressure could prove to be beneficial and result in some bites.

The Murray State University team of Nick Montilino & Nick Inzeo entered the final day in 20th place.  So far this morning, they have only two fish.

Garrett Warren & Eric Lampkin from Snead State Community College have three fish on the day for not much weight.  They came into competition today sitting in 9th.

A group of anglers representing Oklahoma State University has a limit.  Nathan Gibson and Josh Shapland had just one fish yesterday, but have rallied today to catch five. 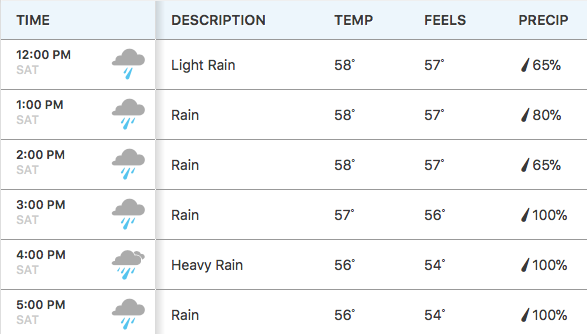 The clock just passed noon and the first flight of boats is due back in at 3:00 PM.  With bad weather on the horizon and tougher than normal fishing conditions you can almost guarantee changes in not only the leader board here at the AFTCO Collegiate Bass Open, but also to the race for the Cabela’s School of the Year Presented by Abu Garcia as well. Past history in the SOY race, or frankly any race for the angler or team of the year in the bass fishing world, has shown that one or two bites over the course of a year can make a big difference.  With today’s conditions there is little doubt that this year’s AFTCO Collegiate Bass Open title and eventually the SOY race may come down to a few bites late in the day that one team gets that moves them into the top ten or even to the winners podium.  These next few hours will be very crucial for everyone out on Lake Dardanelle this afternoon. 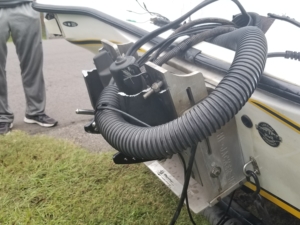 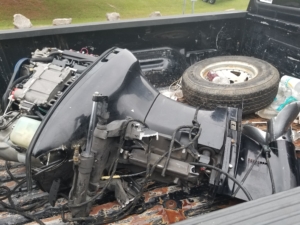 Practicing safe boating is key when navigating in a boat, especially on a river system.  Kory England and Matt Baker from Arkansas Tech University encountered boat trouble while running roughly 50 mph.  The engine on their boat separated from the boat, causing Kory to lose control of the boat.  Luckily Kory was wearing the kill switch, and both anglers were wearing life jackets.  The boat is now out of the water. Along with getting the boat to dry land, they were able to recover the motor.  Both anglers are safe and have made it back in to the weigh-in site.

We have caught up with the 3rd place team in the Cabela’s School of the Year Presented by Abu Garcia.  Lucas Murphy and Bill Mathews have four fish in the box.  They were in 10th place after day 1.  If they are able to match, or improve upon yesterday’s limit, there is a good chance for them to move up the leaderboard.

Rain has been falling at the weigh-in site for about 45 minutes now.  This is just a steady rain.  Probably enough to bother anyone fishing, but it may turn the bite on towards the end of the day.

Griffin Heffington and Mason Cizek of Bryan College have roughly 8 lbs.  They were in 3rd place to start the day. 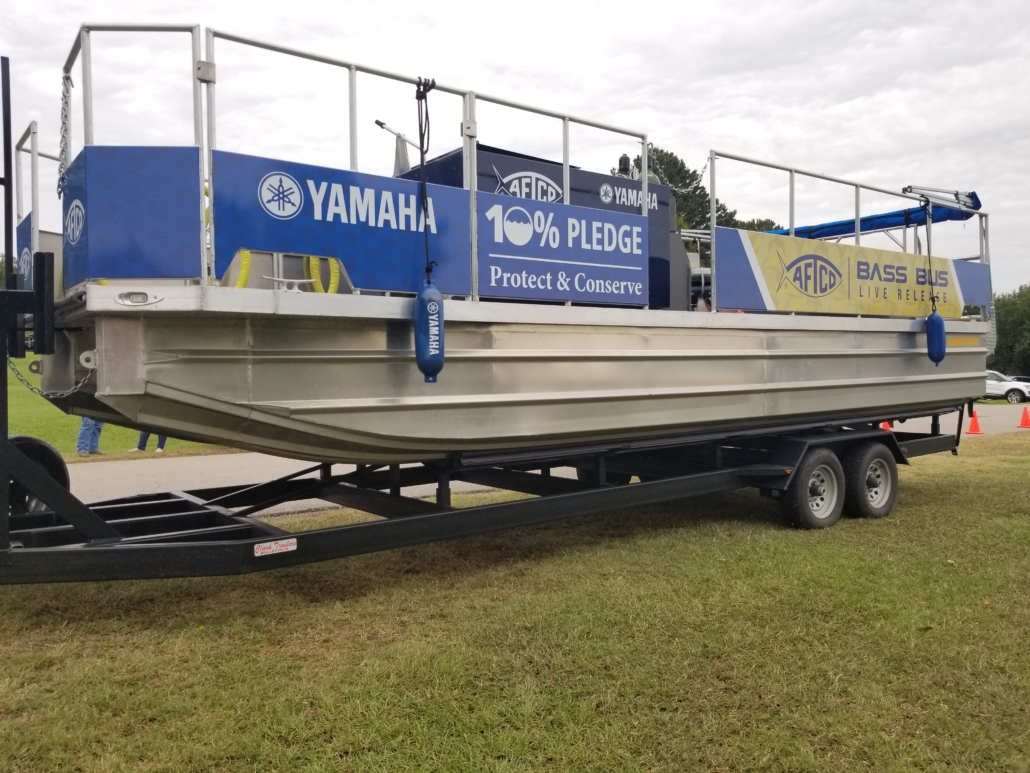 The rain is continuing to fall over Lake Dardanelle.  When looking at the radar, it appears this rain will be in the area for quite awhile.  This will be the final update before weigh-in begins at 3:00 PM.  Weights are tight and it will be very exciting to see how things unfold later this afternoon.