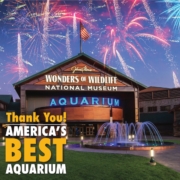 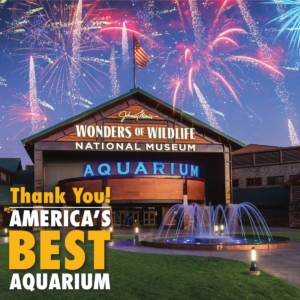 conducted by USA TODAY ranking the top 20 prominent institutions across North America. The latest nationwide recognition marks the second time that the conservation-based museum and aquarium has been nominated for and voted as the winner of the significant award.

Wonders of Wildlife is a gift to the sportsmen and women of America from noted conservationist, angler and Bass Pro Shops founder Johnny Morris. Johnny endeavored to create a world-class not-for-profit conservation attraction located in his hometown of Springfield, Missouri, next to Bass Pro Shops’ flagship headquarters store – where half the nation’s population lives within a day’s drive. Unprecedented in scale and scope, Wonders of Wildlife has been acclaimed as the most important natural history museum to open in America in more than a century.

Featuring an immersive design with surprises around every corner and more than 35,000 live fish, mammals, reptiles, amphibians, and birds, the not-for-profit Wonders of Wildlife is unlike any other aquarium on earth. Fans cite the aquarium’s over-the-top multisensory habitats, engaging interactive exhibits and strong conservation ethic as defining features that set Wonders of Wildlife apart. Larger than the Smithsonian Museum of Natural History, the not-for-profit attraction is the world’s grandest tribute to the conservation movement.

“We are truly humbled by this distinction and very grateful to every guest, member and fan for their votes and support,” said Morris. “Wonders of Wildlife represents the collective efforts of countless individuals and organizations who share a strong passion for conservation. Together we hope the awareness generated by this award encourages even more people to visit and get inspired to enjoy and protect the great outdoors.”

The Aquarium was nominated for the contest by a panel of nationally respected travel experts as part of USA TODAY’s annual Reader’s Choice Awards. Members of the public across the United States and Canada were invited to cast their vote every day during the month of June to determine a winner. Following its grand opening in September 2017, Wonders of Wildlife was also voted, “America’s Best New Attraction.”

The 1.5-million-gallon Aquarium Adventure brings visitors face-to-face with more than 800 species of live animals including sharks, rays, jellies, eagles, otters, octopus, eels and black bear plus giant game fish from around the world that belong on every angler’s bucket list. In addition to inspiring guests to get out and discover the outdoors, visitors will gain a better understanding of how anglers and other conservationists are improving marine habitats in local lakes, rivers and streams to the world’s oceans and beyond.

The IGFA Fishing Hall of Fame recognizes extraordinary achievements in recreational fishing around the world by anglers, captains, scientists, conservationists, writers, or fishing industry leaders. Featuring some of the sport’s most accomplished men and women through interactive exhibits, personal artifacts and masterfully recreated world-record fish mounts from both freshwater and saltwater species the IGFA relocated the collection from its global headquarters in Dania Beach, Florida.  Established in 1999, the Bass Fishing Hall of Fame is dedicated to celebrating and promoting the storied sport of bass fishing. The Hall of Fame serves as a shrine to the men, women and companies who have supported and elevated the sport. Relocating to Wonders of Wildlife from Birmingham, Alabama, the attraction is a must-see for anglers and fans around the world.