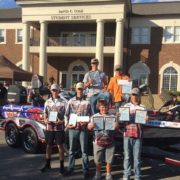 Perhaps Itawamba Community College Bass Fishing Club sponsor Jason Campbell said it best, “What an amazing day of fishing, friends and fellowship!”
And that it was. The October 15 Youth Open Bass Tournament experience on the Tennessee-Tombigbee Waterway was all that and more. From the 6:30 a.m. blastoff to the weigh in at 3 p.m., it was a day of competition for 34 teams for the one with the heaviest bag across the scales. The tournament was open to students from seventh through twelfth grades, with teams of two vying for prizes for first through third place, big bass and the highest placing team with a competing female angler. Students who entered didn’t have to be members of high school teams as was the case for two groups from East Union. “This gives us an opportunity to introduce these groups to what our sport has to offer,” Campbell said.

And at the end of the day, those prizes were awarded, but there was one more, the announcement of a scholarship that will be awarded to a future member of the ICC Bass Club. The Gene M. Tilghman “Gone Fishing” Endowed Scholarship will provide a half-tuition scholarship to a young angler with plans to attend ICC and continue to compete at the collegiate level. Mr. Tilghman’s family was on hand for the announcement, where stories were shared about his love for fishing. Mr. Tilghman, who retired from ICC after 35 years of teaching American history, was remembered by his coworkers as being the teacher who would always joke about cancelling class on a beautiful day just so he could spend some time on the water. According to the story, the students sometimes picked at him by hanging a note on his classroom door that said, “Class Cancelled – Gone Fishing.” Following the announcement, Campbell said, “We can’t begin to express our gratitude for such an amazing opportunity made available to the youth of our sport.”

And if the scholarship announcement by ICC President Mike Eaton weren’t major, there’s more. Since the tournament, five students have joined the North Mississippi Student Anglers, which is open to students whose respective schools may not have an established team. Its director Kristie Nanney said that membership in that organization will enable them to compete in BASS and TBF high school events. “One of the main objectives of our Youth Open Bass Tournament was to introduce our sport to those with an interest with hopes of ensuring increased participation that will lead into the collegiate level,” Campbell said. “We are excited to hear of this growth within North Mississippi Student Anglers and certainly hope our area high school teams will benefit as well.”

Only a few months after its first birthday, the Itawamba Community College Bass Fishing Club celebrated with a successful youth open tournament. And celebrating with its members were those who won including Mitchell Tharp and Harrison Henry, Mooreville High School, first; Hunter Armstrong and Drew Gideon, Smithville High School, second and Big Bass; Zachary Kennedy and Tyler Murray, Smithville High School, third; and Marietta Guthery and Daniel McAfee, highest placing team with a competing female angler. However, the real winners will be those future anglers who receive the Gene M. Tilghman “Gone Fishing” Endowed Scholarship, one that will ensure Itawamba Community College’s Bass Fishing Club will celebrate many more birthdays.