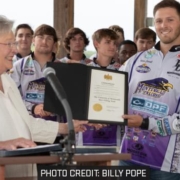 By DAVID RAINER, Alabama Department of Conservation and Natural Resources

A national championship in any endeavor is to be celebrated to the fullest. That’s what Alabama Governor Kay Ivey did recently when she unveiled a proclamation recognizing the accomplishments of the University of Montevallo (UM) bass fishing team at Beeswax Landing on Lay Lake.

“Well done, gentlemen,” Governor Ivey said at the presentation. “How wonderful to win a national championship in something you love to do. We have much to look forward to in this generation, as they pour their passion into learning the importance of a good work ethic and enjoying the outdoors while conserving our natural resources. Hats off to the University of Montevallo Outdoor Scholars Program for giving these students that opportunity.”

“It was such an honor for Governor Ivey wanting to be a part of this to celebrate the accomplishments of these guys,” Crawford said. “We were thrilled Governor Ivey’s office had reached out to us and wanted to do something to honor these guys for their hard work and achievement.” 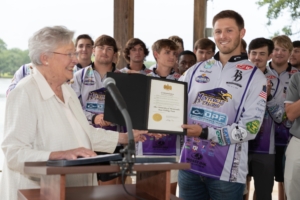 When Chris Blankenship, Commissioner of the Alabama Department of Conservation and Natural Resources, saw that Montevallo had reached the pinnacle of collegiate bass fishing, he reached out to Governor Ivey.

“Any time a team from Alabama wins a national championship, it’s a big deal, and we’re really proud of the school,” Commissioner Blankenship said.  “But, also, I think it says a lot about the type of fishing we have in Alabama, that a team from here that practices a lot in Alabama, competes a lot in Alabama can have that success in a nationwide capacity. It really speaks to the great bass fishing we have in our state.

“When I contacted the Governor’s office, she was really excited about Montevallo winning the championship and wanted to recognize them. The Governor really wanted to do the presentation on the water, not at the Capitol, where she could accentuate the reservoirs and fishing we have in Alabama.”

In a normal year, the team fishes about 22 tournaments. Because of COVID restrictions, the tournament trails hit the pause button last year. When the new season started last August, the tournament list increased to more than 30 events, which made the national championship not only an example of fishing skill but also endurance. The Montevallo teams fished tournaments from Oklahoma to Florida and everywhere in between. The Collegiate Championship was on Lake Murray in South Carolina.

“It was a grind for sure,” Crawford said. “Once we got started back with the tournaments in August 2020, coming off the 2019-2020 season, we were kind of on fire when the season ended. We picked back up when the season started back. We started at Lake Hartwell (Georgia-South Carolina) and got a top 10. We just kept the ball rolling throughout the year.”

“There really was never a lull from our guys just dominating,” Crawford said. “From November 1 (2020) we held the lead the whole time.”

UM built a 1,500-point lead heading into the last month of the season and the National Championship at Lake Murray.

“Thankfully, we had a big cushion going into the National Championship,” Crawford said. “It turned out to be our worst tournament of the year. We had teams in fifth and sixth. It didn’t go well the last day, but we had a big enough lead that it didn’t really matter.”

Montevallo ended up 250 points ahead of two-time defending champion McKendree University of Illinois to claim the championship. The Falcons finished second to McKendree in the 2019-2020 season. Visit www.montevallo.edu/university-of-montevallo-fishing-team-wins-school-of-the-year/ for a roster of anglers on the Montevallo bass fishing team.

“It was one of the best years, historically, in collegiate fishing,” Crawford said. “We have 52 guys on the fishing team, two per boat. We break them up and send them to various tournaments depending on their skill sets and how a certain lake or body of water meets their ability and knowledge.

“It gives us a good dynamic. That set us up well for last season. We’ve got guys who like to fish deep. We’ve got guys who like to fish shallow. When you get a good mix at a tournament, you’re more than likely going to find a bite. It seemed like every tournament it was somebody different who was having success. That’s what really just pushed us through. We just had such a deep, talented roster that somebody was always going to find them. That’s what it took.”

Crawford said the interest in the Outdoor Scholars Program continues to increase at an amazing pace.

“We’re projecting to have 93 students enrolled in the program this fall,” he said. “This will be the seventh year of the program, and it’s grown leaps and bounds. When we started in 2015, we had eight students. That just goes to show the growth and excitement these students have about being part of the program.”

Commissioner Blankenship said Montevallo’s Outdoor Scholars Program is an example of the allure of Alabama’s great outdoors to not only to college students but also to people and industry nationwide.

“Earlier this year, as a part of the Alabama Innovation Commission (Innovate Alabama), a group from Stanford University and the Peabody Fellows Institute studied the economic growth in Alabama moving forward,” Commissioner Blankenship said. “One of the top three areas they see for growth opportunities in our state is outdoor recreation. Working with our beautiful natural resources and all that we have here, that commission said outdoor recreation is a great opportunity for increased economic activity and entrepreneurship. The commission saw great potential there.  We agree; at ADCNR we have seen the potential and have been working to grow jobs in the outdoor recreation sector.

“The President’s Outdoor Scholars Program at the University of Montevallo is an ideal program to train young men and women to work in the outdoors industry. It can also train entrepreneurs to start businesses to find ways to highlight and monetize the natural beauty and fish and wildlife benefits we have been so richly blessed within Alabama. I’ve very proud of that program at Montevallo, and I see great potential for those young men and women in the program as we grow the outdoor economy in our state.”