SAN ANTONIO, Texas – Milledgeville, Georgia’s Georgia College rises atop the Cabela’s School of Year rankings, closely followed by bass fishing powerhouses Auburn University in second and the University of South Carolina in third.  Composed of just under 330 schools from all across the United States and Canada, the Cabela’s School of the Year is the most all-encompassing and prestigious collegiate bass fishing title in the nation.

With only four months remaining, it is now at the heart of the season, when many of the top schools have historically made their move to the top of the Cabela’s School of the Year rankings.  Georgia College Sophomore and Bass Club Public Relations Manager, Robert Keene and Senior and Bass Club President, Justin Singleton shed light on their success leading up to what they believe is a make-or-break point for their club’s future success.

“We had a meeting prior to this season where one of the team’s alumni came and talked to us about setting club goals, because we didn’t end up where we wanted in the School of the Year Rankings last year. So far we’ve been really happy with how we’ve been doing and now we just need to keep it up,” said Singleton.

“Our goal is and has been to be at all three Cabela’s Collegiate Bass Fishing Series events this year,” said Keene. “We’re putting a priority on the double points events, rather than the ones that aren’t, because in the end, those are the more prestigious events that will get us to the top.”

When asked how the double points events could affect the team’s plans to stay ahead of the competition in the Cabela’s School of the Year Race, the club members discussed their point of view of the pros and cons.

“I think the double points events could keep us up where we are in the rankings, or possibly put us out of contention if we don’t perform how we would like at these events,” said Singleton.

“It could really be a double edge sword, depending on how we do,” added Keene.

The Georgia College team plans on attending all three Cabela’s Collegiate Bass Fishing Series events on Kentucky Lake, Lake Dardanelle, and Pickwick Lake. The team’s season has been successful thus far on and off the water as they have gained more than just Cabela’s School of the Year points.

“The year has been going great so far and the team has been doubled in numbers since last year,” said Singleton. 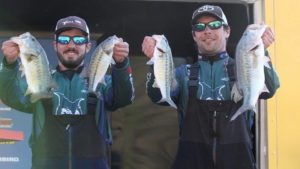 “We’ve received more funding from the school this year and we’ve also gained more sponsors which has allowed us to send more teams to different events,” added Keene. “One thing we’ve been able to do because of our funding is compete in other school sanctioned events like the Georgia Southern Trail in which we also get School of the Year points for the championship event. Other than that we’ve just been wanting to stay on the water as much as possible and practice and have team tournaments just to stay competitive.”

Singleton stated that growth in numbers has also meant growth in teamwork and a competitive nature throughout the Georgia College Bass Team.

“I guess one thing that really changed about our team this year is communication,” said Singleton. “Everyone is more open to help each other and this year it has really felt like we are a team which has led to our success so far, plus we have more guys this year which really helps get more people out on the water and compete. We’ve gone from nine to eighteen members and that’s a number we hope to grow next year too.”

Looking forward, the club intends to keep their top position among the Cabela’s School of the Year Rankings and considers what the future holds.

“Being ranked number one in the nation really does a lot with the awareness of our team and promotes our school, our sponsors, and our fishing program and our continuing growth through our success,” said Keene.

”Winning this title would really mean a lot to our club. This is the highest our school has ever been ranked before and we want to keep it going through the end of the season,” stated Singleton.

The remaining Top Ten in the current Cabela’s School of the Year Rankings are as follows: