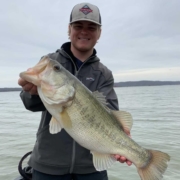 Hundreds of the Top College Anglers to Compete Two Days on Kentucky Lake For $40,000+ Purse and Double Points in Bass Pro Shops School of the Year presented by Abu Garcia

Paris, TN (March 12, 2021) – The first Association of Collegiate Anglers major event of the 2021 season, the Bass Pro Shops Big Bass Bash presented by Berkley, is set to begin tomorrow morning on Kentucky Lake.  Nearly 400 of the top collegiate anglers from some of the highest ranked schools have made their way to Henry County and Paris, TN to compete in this no-entry fee event with a prize payout valued at over $40,000.

Kentucky Lake is beginning to swing into its traditional spring form leading up to this event.  Reports from anglers sound promising following four and a half days of official practice.  Throughout the past several days we have received numerous photos of quality fish being caught out on Kentucky Lake.  Along with the texts and photos, we were able to talk to several of the competitors as they stopped by the weigh-in trailer to fill out paperwork.  The range of answers varied as anglers decided to divulge different amounts of information about their patterns, but one thing remained consistent…there are bites to be had out there.

Look for a variety of baits to play a factor this week.  Crankbaits, lipless crankbaits, and an array of soft plastics will catch fish over each of the next two days.  During day two of competition, anglers will be permitted to use only Berkley Baits.  This includes trailers on jigs and spinnerbaits.  During each of the past two years, the winning fish of the Bass Pro Shops Big Bass Bash presented by Berkley has been won on the Berkley only day of competition.

The Bass Pro Shops School of the Year presented by Abu Garcia will be at the forefront of the conversation amongst anglers and coaches this week.  Only three months remain in the 2020-2021 season, and the Bass Pro Shops Big Bass Bash presented by Berkley is the second to last double points opportunity for teams.  Schools will earn points for each of their two largest fish inside of the Top 100.  The University of Montevallo enters this week with a nearly 2,000 point lead over second place McKendree University. Montevallo has a strong past history at this event, and camera crews will begin the day with team members to bring you coverage of the number one ranked team in the nation.

Tournament launch will begin at 6:30 AM tomorrow morning sending out the full field of anglers for competition at the 2021 Bass Pro Shops Big Bass Bash presented by Berkley.  Each weigh-in session will be broadcast live across social media, the ACA website, and the Outdoor Action TV app.  Be sure to tune in to catch all of the action from Kentucky Lake this weekend!