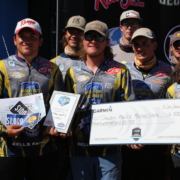 PARIS, TN (September 20, 2020) – The final weigh-in session has concluded, and anglers are now on their way home from the 2020 Bass Pro Shops Big Bass Bash presented by Berkley.  Paris, TN and Kentucky Lake proved yet again why this is considered one of the top tournament destinations in the country.  Anglers enjoyed beautiful weather conditions and a plentiful number of quality bites during the two days of competition.  The final day, which featured anglers using only Berkley baits, lived up to its billing as one of the most anticipated days of the year.

Matthew Cummings started things off with a bang as he brought a 4.78 pound bass across the stage to claim top honors for Day 2 Session 1 presented by Abu Garcia.  He caught the session winning fish on a Berkley Hit Worm, a finesse style soft plastic.  Cummings became the third Bethel University angler to win a session at this weekend’s tournament.  By taking 1st Place in that session, he received a $300 Bass Pro Shops gift card, Abu Garcia Veritas rod, and an Abu Garcia Revo S reel.

The first session of the day in which anglers were required to use only Berkley baits proved to be a fruitful one.  The lightest fish in the session to win a prize, 10th place, weighed 2.96 pounds.  Day 2 Session 1 was one of the more competitive sessions of the entire event.  Anglers reported catching fish on a variety of Berkley products including the Choppo, J-Walker, Power Swimmer, and Chigger Craw.

A Berkley topwater bait helped to reel in the winning fish of Day 2 Session 2 presented by Berkley.  Evan Hill from the University of Tennessee caught a bass weighing 4.07 pounds on the Berkley Choppo.  “We were just fishing along a nothing bank near a marina,” said Hill.  “That fish came up and hit that Berkley Choppo.” The Choppo is a propellor style topwater bait that excels when being reeled continuously across the surface of the water.  Many anglers in the field received one of these baits as part of their swag bags before the event began.

The final session of the day, Session 3 presented by Bass Pro Shops, paid out the most places of any session in this event.  A total of 20 anglers earned prizes for their catches during this two hour period.  Here is a look at how the session shook out: 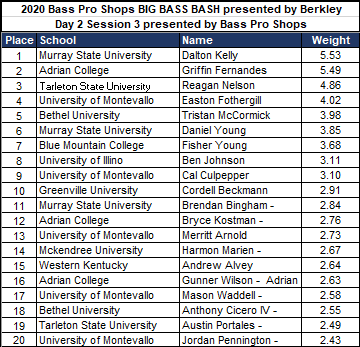 Dalton Kelly from number one ranked Murray State University won Session 3, and claimed 1st place overall for the entire event, with a largemouth bass weighing 5.53 lbs.  “Honestly, I can’t believe that just happened,” noted Kelly.  “I caught that fish on a Berkley Choppo.”  Kelly, who had already weighed in during another session earlier in the day, became the second angler on day two of competition to win a session using the Berkley Choppo.  He earned a $1,000 Bass Pro Shops gift card, Abu Garcia Revo Ike spinning reel, and an Abu Garcia Veritas rod.

The 2020 Bass Pro Shops Big Bass Bash presented by Berkley was an all-around great event to kick off the 2020-2021 season for the Bass Pro Shops Collegiate Bass Fishing Series.  Our coverage is not complete for this weekend’s event.  In the coming days we will publish an article on the overall winner Dalton Kelly, and update the standings to the Bass Pro Shops School of the Year presented by Abu Garcia.  Stay tuned to our website and social media for all of that extended coverage.