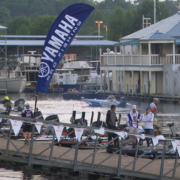 What Collegiate Anglers Should Expect On Pickwick Lake  During Championship Week

The 2017 BoatUS Collegiate Bass Fishing Championship presented by Cabela’s is nearly here.   The college anglers will soon be arriving in beautiful Florence, Alabama to fish Championship Week while enjoying all the festivities associated with this competition week.  Pickwick is always a huge favorite among anglers because it is full of bass that can be caught both shallow and deep.

When nearly 400 college anglers blast off onto Pickwick Lake for their practice and competition days during Championship Week, they’ll be facing a wide range of choices on how and where to fish.  Do they fish the deep ledges, what about the tailraces, or go shallow to fish the ample cover along the banks?  We took the time to speak with numerous professional anglers to get their thoughts on what the collegiate anglers should expect; here top touring pros Clark Wendlandt and Jeff Kriet share what they would do.

“Due to the lock being out of service for this event, everyone will have to find them on Pickwick, but the lake is plenty big enough and good enough of a fishery to handle it. For guys who haven’t experienced Tennessee River ledges, basically you’re looking for long bars with shell and stumps on them.  Most of the best spots will be in the current. One thing about these Tennessee River Lakes is that the fish live offshore for a majority of the year so there are plenty of fish to catch along these ledges.”

“The bass on Pickwick Lake in mid to late May are almost always in the post spawn/early summer time phase.  I start looking for them on creek channel and river ledges near the mouth of spawning pockets and creeks. The key depth is usually around 8 to 20 feet and I try and target irregularities on the drops. These can be shell beds, turns, or high spots.”

“On any of the Tennessee River lakes, current will play a big factor on when the fish will bite. Pickwick is definitely no exception to this and the more current they run, the better the fishing will be”

“If anglers are catching fish in the two pound class consistently, I’d recommend that they move, since the fish on Pickwick tend to group up by size. For teams who are comfortable with a variety of techniques and styles, then they should consider starting shallow early and then move out to the ledges later in the day.”

“You’re still going to have fish shallow, but you’ll have fish start to slide out offshore as well that time of the year.

This is a lake that is important to fish to your strengths because you can catch big fish no matter where you are throughout the lake but it will be important for everyone to pay attention to the current, if there is any, as fish will bite a lot better.”

“The guys that can find them offshore are usually going to catch the bigger sacks of fish and probably be the favorites to win.   I feel that time of year in May, the fish will usually be on secondary structure like some of the creeks, secondary cover, and shallower ledges closer to spawning pockets because they will be just moving out from the spawn.   For the guys that aren’t ledge fisherman, you can still catch a good limit shallow. The guys that can find the shad spawn can also catch a big limit really fast as well on shallower bars. The early morning top water bite could also definitely be a factor in the event.”

“The beauty of this lake is that there are options galore and anglers can pursue their angling passion.  I’d encourage anglers to fish their skills and keep an open mind going into practice,” said Kriet.  Another Kriet Quote  from 2013 still holds true: “When you go to a lake that good, you can’t ever get satisfied.”