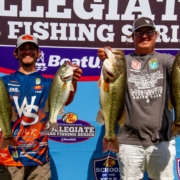 Parks & Smith from Auburn University are in 2nd, and Kentucky Christian’s Whitaker & Johnson sit in 3rd after Day 1 of the 2022 BoatUS Collegiate Bass Fishing Championship presented by Bass Pro Shops 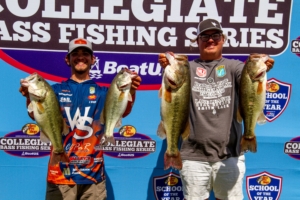 FLORENCE, AL (May 26, 2022) – An elite field of collegiate bass fishing teams took to Pickwick Lake this morning to compete in the 2022 BoatUS Collegiate Bass Fishing Championship presented by Bass Pro Shops.  Competing for their share of $30,000 in prizes & contingencies, a National Championship, and the coveted Bass Pro Shops School of the Year presented by Abu Garcia, anglers fished the waters of Pickwick and Wilson Lakes in search of a quality Day 1 limit.  Bryar Chambers & Clent Blackwood from Wallace State are in 1st place after Day 1 of tournament competition with a total weight of 23.66 pounds.  Logan Parks & Tucker Smith from 2nd ranked Auburn University are in 2nd place with 21.53 pounds, and Kentucky Christian’s Gunner Whitaker & Mitch Johnson sit in 3rd with 19.40 pounds. 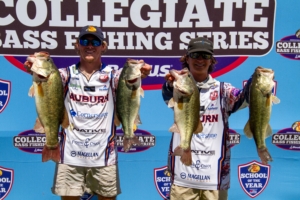 Day 1 of tournament competition began with a rainy start, as showers and storms pushed through the Shoals Region until approximately 11:00 AM this morning.  Once those storms cleared out, anglers were greeted with blue skies and windy conditions.  The windy conditions created a challenge for anglers returning to weigh-in this afternoon, resulting in numerous late penalties being assessed to teams that did not make it to check-in on time.  All assessed penalties are included in the official Day 1 tournament standings that can be viewed HERE. 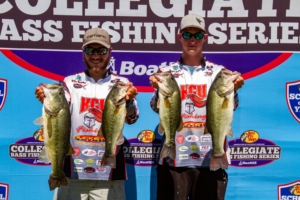 A majority of the anglers are reporting that the fish are spread out across a variety of shallow water and transition areas across the lake.  While there are some bigger fish out on the famed Tennessee River ledges that Pickwick Lake is known for, teams seemed to be focusing on shallow water spots and transitional areas located just off of the main river ledges.  Everything from drop shots to big soft plastics were mentioned as baits that produced bites on Day 1 of tournament competition.

Taking a quick glance at the Day 1 standings, the Top 10 is separated by approximately six pounds.  Out on Pickwick Lake, that’s a margin that can be easily made up on just one cast.  In the past, the magic number for a two-day total at this event has been 40 pounds.  If a team is able to get to 40 pounds after Day 2, they have a real shot at taking home the National Championship trophy.

As it pertains to the Bass Pro Shops School of the Year presented by Abu Garcia, several of the top ranked schools have teams in the Top 25 of the standings.  The big race to watch is between top-ranked University of Montevallo, and 2nd ranked Auburn University.  Auburn University’s two highest-placing teams at the moment are in 2nd and 21st overall.  Montevallo’s two best teams are in 15th and 46th.  Who will finish the season ranked as the number one team in the nation?  Find out tomorrow following the conclusion of Day 2 weigh-in!

Day 2 of tournament competition will begin tomorrow morning at 6:00 AM with the start of official takeoff at McFarland Park.  Follow along with the live blog on the ACA website as tournament action unfolds out on Pickwick Lake.  Weigh-in coverage will begin at 2:00 PM (CT) on the Outdoor Action TV app.  Get ready for all of the action as we crown a National Champion, name the 2021-22 Bass Pro Shops School of the Year presented by Abu Garcia, and award over $30,000 in prizes and contingencies.