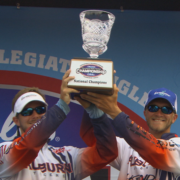 Just like the Super Bowl, World Series, Stanley Cup, and the NBA Finals, the BoatUS Collegiate Bass Fishing Championship crowns the best team in the sport. With 200 teams from 95 schools competing, to include 20 of the top ranked teams in the nation. There is no event more prestigious in the collegiate fishing world.  Winning this event is not easy, you have to preform at your best and fish a flawless event. In the world of sports, there is no sport more mentally demanding than fishing, simple things like the color of your bait, how heavy a weight to use, or where to fish all weigh on the anglers’ minds throughout the event.

One of the other variables that sets tournament fishing apart is that size of the playing field on which the anglers compete, let’s compare Pickwick lake at 43,100 acres to other playing fields in professional sports. A NFL Field is 1.32 acres, an NBA Court is .18 acres, the average MLB field is 2.49 acres, and an NHL Rink is .39 acres.  Anglers are given four official practice days to break down all 43,100 acres, plus they must factor in weather, current, water temps, and many more unknown factors.  The anglers have so many different things to factor in to be able to win the Championship, it shows why you have to be on your A game the whole event.

We recently asked six teams what it would mean for them to win.   The list included past champions, a team that narrowly missed taking home the trophy last season, the team coming off a recent victory at the Texas Collegiate Challenge, current number one ranked team in the nation, as well as the local hometown favorites.

The 2016 Champions Mitchell Jennings and Cole Burdeshaw from Auburn University will be in the field again this year.  We talked to them about what it would mean for them to be the first ever team to win back-to-back BoatUS Collegiate Bass Fishing Championship presented by Cabela’s titles.

“We are going to fish this tournament like any other, with an open mind. Last year, we were very fortunate to not lose any key fish and we had our timing right. To win again would be a blessing. It would mean the world to us both and we are going to practice hard to have that opportunity to repeat,” said Mitchell Jennings.

“There’s no doubt that going back to back on a National Championship would be amazing, but we have to put that out of our mind for now. You can’t let pressure get to you in big tournament situations, and our job for the next week leading up to the tournament is to put our head down and focus on this year’s tournament, not on what happen last year. We are definitely looking forward to the Championship. Regardless of the outcome, we know that this event will be one of the most fun tournaments we fish all year. Last year was a huge opportunity and a life-long memory for us, and to relive that would be awesome, but we have to fish the moment this year for that to be a possibility,” said Cole Burdeshaw.

JP Kimbrough from LSU Shreveport was one half of the second-place team from the 2016 Championship.  We asked the LSU Shreveport team what it would mean for them to come back this year and take home the title.

“You know, with the competition as tough as it is in college fishing, winning against these guys is as hard as it ever has been, so it would mean a lot to take the title this year. Last year’s loss and coming in second hurt a lot, so this year I’m seeking revenge,” said JP Kimbrough.

Coming off a recent win on Lake Texoma at the 2017 Texas Collegiate Challenge presented by Abu Garcia, the Dallas Baptist team of Zackery Hines and Trent Newman are the most recent winners and want to continue their good luck streak and take the Championship back home to Texas.

“Winning back to back tournaments would be amazing, especially since this one is the Championship. This is one of our favorite events to fish all year and it’s definitely one we’ve wanted to win for a while. Pickwick is always challenging and you really have to put your work in to find that special area or group of fish that help you win. We’re looking forward to getting down there at the end of this week and going to work,” said Zackery Hines.

“Any time the Lord gives you a shot at winning a tournament is always a blessing. A win at this level is just not something that happens to often. The guys on the college tour are good and the competition is stout, so to win back to back tournaments would be so special – especially to do it on Lake Pickwick! This tournament really has some hammers in it every year! It’s no secret that Pickwick is one of those places that you can find a magic hole and win off that spot we will see what God has in store for us this weekend!” said Trent Newman.

As a freshman, Northern Kentucky’s Brandon Knapmeyer won the 2015 BoatUS Championship.  Brandon will be competing this year as a junior. We asked Brandon what it would mean to him to win the even again.

Florence, Alabama is the home to the University of North Alabama as well as Pickwick Lake.  The President for the UNA team is Nathan Martin and we asked him what would it mean to be able to win the Championship on their home lake.

“It would mean the world to me. With the BoatUS National Championship returning to Pickwick Lake every year, it makes the tournament very special to me. I have grown up on Pickwick my whole life. My family has a lake house in Big Bear and my mom used to take me fishing every spring break and sleep in the boat just so I could fish. I know every inch of the lake and if I was able to hoist that trophy in front all of my friends and family it would mean everything to me. I know that adding a win in this National Championship to my resume would be huge for advancing my career to the next level and chasing down my dream of fishing professionally. I have put in hundreds of hours pre-practicing and getting prepared for this one tournament. I hope it pays off so I can win it for all my friends, family, and local hammers that I compete against every weekend here!” said Nathan Martin.

One of the most consistent college schools this season has been Bryan college.  They’ve been ranked number one most of the season according to the Cabela’s School of Year Rankings.  One of their teams, Nathan Bell and Cole Sands had this to say:

“We are all super excited to be in the position we are in going into the Championship at Pickwick. After winning the B.A.S.S Eastern regional this past weekend at Lake Cherokee, we feel that we are in great position to be able to win SOY. We have been so blessed to have strong showings in the events leading up to this. Winning SOY would be huge for our young program because the school has invested so much in our team. It would solidify our standing with the school as being something to take seriously.  The preparation that went into this season has been different for every team, and for us it was studying the lakes that we would be going to and getting the right gear to do well on those particular lakes. The main thing for Cole and I was installing Garmin electronics on my boat. It has been a game changer for us this season. The downVu and sideVu was so good that it lead to us finding fish in several events where we did really well in.  I cannot wait to see where the Garmins will take us at Pickwick.”