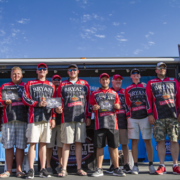 Bryan College has won the 2017 Cabela’s School of the Year presented by Abu Garcia title!  Widely regarded as the hardest and most sought after college fishing title in the nation, this is the first time that Bryan College has earned this prestigious award. In only their programs third year out on the circuit, Bryan College has managed to accomplish this amazing feat and garner the attention of the entire fishing community.

The Cabela’s School of the Year presented by Abu Garcia program offers college anglers the chance to compete at the highest level in numerous collegiate fishing events held all over the nation. The Association of Collegiate Anglers created this program with Cabela’s to both rank and reward collegiate fishing teams based on their performance in the Cabela’s Collegiate Bass Fishing Series, Carhartt College B.A.S.S. Series, and FLW College Series, as well as select school-hosted and operated events.

“We have been so blessed to have strong showings in the events leading up to this. Winning School of the Year is huge for our young program because the school has invested so much in our team. The preparation that went into this season has been different for every team, but for us it was studying the lakes that we would be going to and getting the right gear to do well on those particular lakes,” said Nathan Bell, Bryan College angler.

When asked just how prestigious this title is, the Director of College Operations for the Association of Collegiate Anglers, Wade Middleton, said that “This is the ultimate trophy in college fishing because it’s earned on the water over a full year of fishing.   It’s not voted on, it’s not a title bestowed on you by votes or because of finishing on top at one event or anything of that nature.  This title is earned by all the members of the school team and how they jointly fished as a school at events all year long.”

Full coverage and insight from numerous members of Bryan College Bass Club will be coming soon as we take an in-depth look at the team, what it took to win this prestigious title, and what’s ahead for the active team members in the 2018 season.