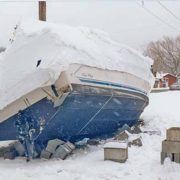 Watch Out For These 3 Winter Uh-Ohs

By Charles Fort via BoatUS

Before you put your boat to bed this winter, makes sure it’s properly winterized or you could be in for an expensive surprise next spring.

With winter approaching and many boats being hauled for the colder months we thought that this would be a good time to share some of the problems that have come across the desks of our insurance folks here at BoatUS We can all learn from others mistakes so we include these unfortunate incidents here with some sage advice about taking care of your boat during layup season.

If you haul your boat every winter, make sure it’s well supported. Using cinder blocks is never recommended for two reasons: The blocks aren’t designed for supporting heavy weight and can be crushed, and as the photo shows, it doesn’t take much to knock a boat off its blocks. This boat toppled over after a moderate winter storm. Boats should be supported by jack stands and need at least two per side and three or more if the boat is longer than 26 feet. (For sailboats, jack stands should be spaced no farther than 10 feet apart.) Long overhangs may require extra stands. When you visit your boat this winter, check to make sure the jack stands haven’t shifted or sunk into the ground. If you see something that needs adjusting, don’t do it yourself. Have the yard take care of it. Some powerboats, such as some sportfishermen, have cored keels that require special attention.

Here’s a dramatic example of why you shouldn’t use a standard automotive battery charger in your boat. The battery here was being charged with such a charger fed by an older 100-foot extension cord. The old charger, fine for topping up a battery in your car, was left on to charge the battery for weeks. But these old devices simply keep pushing current into the battery until it’s full, at which time they’re supposed to be manually disconnected. If they’re not, they’ll keep pumping current even if the battery is full. Eventually the battery overheats and the electrolyte will boil away. Once that happens, continued charging heats up the battery even more until it starts to melt and eventually catches fire.

Two takeaways: First, only use a marine-rated battery charger. These types of chargers sense when the battery is fully charged and either turn completely off or go into a “float” mode and trickle charge the battery to keep it topped off. Second, don’t use an old beat-up extension cord because the current draw from a charger can cause defects in the cord to overheat and catch fire as well. And a 100-foot extension cord shouldn’t be used for anything that will take a lot of current for a long time. Use a shorter cord or a long cord specifically rated for high current. 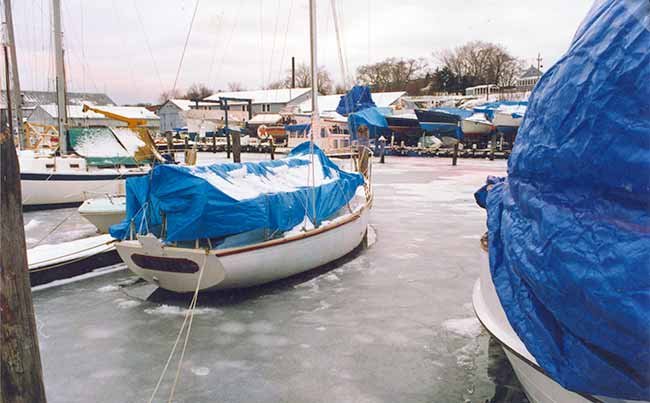 Freshwater expands in volume by about nine percent when it freezes and can push outward with a force of tens of thousands of pounds per square inch. That expansion can crack an engine block, damage fiberglass, split hoses, or crack a sea strainer and sink your boat. Damage happens all over the country, not just from the states that get snow every year. Boaters in the frozen north know they need to winterize, so their freeze problems almost always involve an issue with how the boat was winterized. In the temperate south, there are many more problems where the boat wasn’t winterized at all, or where the boater was depending on a heater to keep the engine from freezing, and the electricity went out.

For a complete guide to winterizing your boat download the “BoatUS Boater’s Guide to Winterizing” complete with checklists to make sure you don’t miss anything.