With spring just around the corner, the race to win the most prestigious title in collegiate bass fishing has begun to warm up just as the water temperatures have.  This year’s race for Cabela’s School of the Year presented by Abu Garcia has turned to be one of the biggest and hardest one to win thanks in large part to a new points system designed to provide more points earning opportunities than ever before for college anglers nationwide.

Bethel University’s bass fishing team – which is widely regarded as one of the best college fishing teams in the nation – is in search of their first Cabela’s School of the Year title.  Bethel has held the lead a couple of times this season, but after some great showings at both the Texas Lunker Challenge presented by Mossy Oak and the recent FLW qualifier in Florida, the Bethel team has once again taken over the lead in the season-long quest to be crowned the best fishing team in the nation.  Holding on to 2nd place is Northwestern State University, who is staying steady with consistent fishing; and moving from 1st place to 3rd place is Louisiana State University-Shreveport. 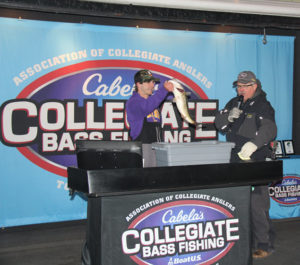 “Once again, we here at Bethel University, find ourselves sitting in the number one spot for Cabela’s School of the Year. We are very proud of this achievement as it personifies the hard work and dedication of not only our anglers, but of our whole University, in their great support of all our fishing endeavors,” said Garry Mason, Bethel University Fishing Team Coach. “To win the school of the year award this season would be a great honor and we know that we have a long way to go to capture the title for Bethel.”

Bethel University had two great finishes which helped propel them back into the top spot. Bethel anglers Cole Floyd and Carter McNeil made an impressive run taking 1st at the FLW Southeastern event on Lake Seminole with 28.10lbs and earning 200 points. In the same weekend that the FLW Southeastern was taking place, Bethel also had anglers fishing the Texas Lunker Challenge presented by Mossy Oak Elements on Sam Rayburn Reservoir. Their two highest finishing anglers received a combined total of 860 points to add to their school of the year points.

When asked what their strategy will be for the rest of the season, Coach Mason said, “Our plans are to continue to compete on the highest level of college fishing and to achieve winning the School of the Year, we know that we must finish well in each of the tournaments upcoming. The competition is very strong and because of this we know that we must be in the top five in each event. The School of the Year is great program and we hope to be on the top of the list when this year’s competition comes to an end.”

One of those schools still in the hunt for their first ever Cabela’s School of the Year win is Northwestern State University.  Despite being one of the smaller schools in the nation, their consistency over the last month and a half has proven their capability to not only get the job, but also their ability to fish with the best.

Finally moving down into the 3rd place spot is Louisiana State University-Shreveport who had a notable run in 1st over the last couple of weeks. LSU-Shreveport has also been consistent and determined to bring the Cabela’s School of the Year title to the south. With the FLW Open coming up in March, look for LSU-Shreveport to make a move to get back into the number one spot.

It comes as no surprise to college fishing fans to see some of the top college fishing schools in the nation holding down a spot in the top 20 rankings! This only proves that these last three months of the race will be close to the bitter end. There are still two major ACA events worth 500 points each and at these events, the top two, highest finishing anglers/teams for each school will earn points.  There are also several other top events on both FLW And BASS college schedules that will allow teams far back in the standings to make a major move into the top 20 and even challenge for the top spot.  Stay tuned!