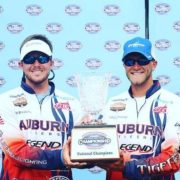 SAN ANTONIO, Texas – Two weeks after the 2016 BoatUS Collegiate Bass Fishing Championship Presented by Cabela’s, the Auburn University team of Mitchell Jennings and Cole Burdeshaw are finally realizing the magnitude of their win. Moments after raising the championship trophy, Jennings and Burdeshaw were lost for words, but with time, they have each been able to grasp the significance of what this championship title means.

“It still feels like a dream to have won such a big event. We were blessed with a great week of fishing on a very good lake. I fished this event in 2014 and placed 16th but just didn’t get enough of the right bites and it left me hungry for more competition. We were fortunate enough to get the right bites this time around. It feels good when a plan comes together I guess,” said Jennings. “I watched a lot of collegiate fishing during my time in high school and really wanted to compete ever since. To be considered a national champion now is definitely a humbling feeling.”

Burdeshaw add that “It is very satisfying to say the least. You can never be truly content in this sport, you always want more. But it feels really good to have this kind of win on our resumes.”

A win for Jennings and Burdeshaw means a win for Auburn University. The team is proud to be able to bring home their first national championship and to be able to share it with their teammates.

“This win is Auburn’s first fishing National Championship. We’ve been close in every circuit and have stayed consistent for the most part, but this win has opened doors for our entire team, not just me. Ever since we won people on our team have (jokingly) called me ‘champ,’ but I tell them that we are all National Champions now. Our club has received a lot of recognition from this win from our school, our community, and our sponsors,” said Jennings.

Also proud to bring the title back home to Auburn, Burdeshaw wants to share this win with not only his current teammates, but those previously represented Auburn University on the water.

“This win is such a huge deal to our club,” said Burdeshaw. “It’s the first national title that our club has won so it wasn’t just a win for our current team, but for all the great anglers who have competed on Auburn’s team in the past.”

Burdeshaw and Jennings were able to capture quite a few memories during this event and shared their favorites while looking back on their experience throughout the event. 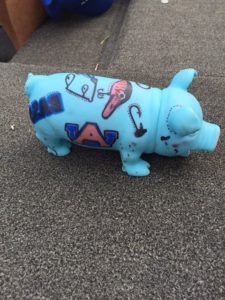 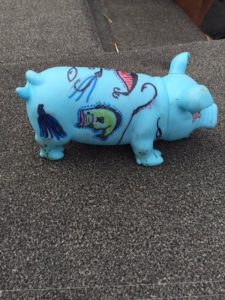 “Competing so close to the LSUS team was pretty awesome; not just the actual fishing part, but realizing and proving that sportsmanship isn’t dead,” said Burdeshaw. “I know a lot of people think that the young guns in this sport have forgotten how to show respect, and it felt good to show that when you respect each other, great things can happen. It felt good to have the top two teams show that much sportsmanship.”

Jennings added that “My favorite experience from the tournament is also what I look forward to the most at next year’s event. In this sport, you meet a lot of new people who share the same passion you do. I look forward to meeting these people and look forward to the camaraderie amongst ourselves. I have met lifelong friends in this sport and cherish the time I get to spend on the water with them. Auburn has given me this opportunity and I am very thankful for my school and thankful for a very supportive family and group of friends.”

Burdeshaw and Jennings also thanked a good luck charm they keep in their boat at every event – the good luck pig! The duo stated that the good luck pig stays in their glove compartment at each event, and that they give it a rub before each day of competition.

Along with the motivational support of his family, friends, university, and the good luck pig, Jennings was motivated by a philosophy that encompasses much more than just fishing.

“I have a favorite Thoreau quote that pertains to everything I just stated and fishing in general, which is ‘Many men go fishing all of their lives without knowing that it is not fish they are after.’ So figure out what part you’re really after and make every day count!” exclaimed Jennings.