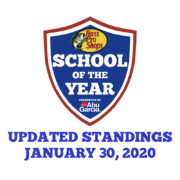 San Antonio, TX (January 30, 2020) – 2020 is here and collegiate anglers are back from their holiday breaks and on the water.   With that comes the first qualifying events for the spring semester and the first opportunity to earn points towards the 2019-20 Bass Pro Shops School of the Year presented by Abu Garcia.

The spring half of the season promises to be one of the most competitive finishes in the history of the program as there are numerous opportunities ahead for earning points.  Updates to the scoring system are creating higher points totals and a jam-packed leaderboard as evidenced by this past weekend’s BASS Collegiate event that saw Bethel take top honors and a tightening of the School of the Year race that has seen Adrian College lead almost all season long.

To set the stage, the first major event of the season was held last weekend as the Bassmaster College Series competed on Toledo Bend Reservoir in southeast Texas.  Every team inside of the Top 10 in the School of the Year Standings was on hand and almost all the teams finished well.  There was only one major shakeup inside of the Top 10.  Carson-Newman University moved up into the 10th overall spot after being previously ranked 12th.  The remainder of the Top 10 held form from the final update of 2019.

Here are the other teams that made notable moves up in the standings to be ranked in the Top 25 in the nation as of January 28th, 2020.

Carson-Newman University moved into 10th they were previously ranked 12th

University of North Alabama moved up to 16th from 20th

University of Wisconsin-Stevens Point moved to 19th from 27th

Mississippi State University moved up to 22nd from 30th