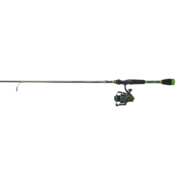 COLUMBIA, S.C. — Anglers looking for a way to take their fishing to the next level have been spending this season putting the Abu Garcia Virtual rods to the test. These innovative rods have given anglers the ability to plan, record and improve their fishing success by gathering real-time fishing data like waypoints and catch records with the push of a button, linking the rods to the ANGLR™ app via Bluetooth-enabled cell phones. Now, Abu Garcia is making it even easier for anglers to pair their cutting-edge rod technology with custom-matched reels through the new Virtual combos.

The Virtual series of rods is the first to integrate this type of technology and has been created in concert with ANGLR, an innovation company that offers a free fishing intelligence app that helps anglers plan, record, and improve their fishing. The Virtual rods allow the angler to simply press a button to record catches, double-click to drop editable waypoints at their exact location, and press and hold the button to indicate a change in tackle. The action to record a catch also compiles location, weather, and water data with the stored catch information.

Building on this powerful functionality, the ANGLR app can simultaneously and seamlessly transfer waypoints bi-directionally onto compatible Lowrance® multifunction displays. The NMEA-based sync also allows data sharing from Lowrance sensors back to the app, providing greater precision by importing precise depth, water temperature, real-time GPS routes, and other data to be added to the user’s logbook. This information, coupled with the durability and performance of Abu Garcia rod technology, will provide anglers a complete package as they look to maximize their time on the water.

Abu Garcia is known for delivering gear that gives anglers what they need to “fish to win,” and that reputation takes on an additional dimension with the Virtual combos. When connected to friends via the ANGLR app, anglers can compete for bragging rights even when they aren’t fishing together, setting the stage for “virtual” tournaments whenever it’s time to go fishing.

The Virtual rod connects to the free ANGLR app on iPhone and Android devices. It also enables the phone’s camera to add a photo. All recorded fishing data is 100 percent private by default. The rod does not require charging and delivers a 2-year battery life. It works regardless of cell service for off-the-grid fishing and is ideal for small-water and small-vessel anglers who typically have not had access to electronics while fishing. Paired together, the ANGLR app and Virtual rods allow anglers of all experience levels the ability to capture and review their trips so they can strategize how they can fish to win even bigger on their next trip.

The Abu Garcia Virtual combo lineup includes two different baitcast combos, each available in either right- or left-handed configuration, as well as two different spinning combos, each available in either a 1- or 2-piece rod configuration. Virtual baitcast combos have an MSRP of $179.95; spinning combos have an MSRP of $159.95. For more information on the Virtual rod and Virtual combos, visit http://bit.ly/AbuGarciaVirtual.

Berkley Baits To Tie On For Kentucky Lake
Scroll to top