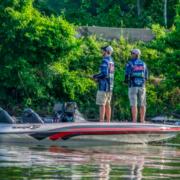 FLORENCE, AL (6/8/2020) – Amongst the bass fishing community, the Tennessee River is widely considered one of the best summertime destinations to find loads of fish piled up out on its world-renowned ledges and offshore structure.  One of the crown jewels of this river system is Pickwick Lake in Florence, AL.  In just two days, hundreds of the best college fishing teams in the nation will be out on Pickwick Lake competing in the 2020 BoatUS Collegiate Bass Fishing Championship presented by Bass Pro Shops.

At first glance, this tournament is setting up to be an absolute slugfest.  Warm temperatures have been suffocating the south, and the fish have completed their migration from shallow spawning areas out to their summer haunts.

Weather conditions are one item to keep an eye on.  Though it appears as if things will clear up in time for the tournament to kick off on Wednesday, the next two days here in Florence call for a solid chance of rain as a tropical storm makes its way north.  Thunderstorms and rain will be in store for the next 48 hours or so.  Although this may put a slight damper on the conditions for anglers as they pre-fish, it could really present a prized gift to the field in the form of additional current.

“Just having new water run through the system makes fish feed more,” noted Chase Dawson from the University of Tennessee.  “If you end up having a tournament where there’s been no rain…and it’s really just stagnant, it allows the fish to spread out…and it’s just a grind.”

Current is a big player out on river systems like the Tennessee River.  It seemingly serves as a dinner bell for the hungry bass lingering around the ledges in search of an easy meal.  This part of the country has seen a good amount of rain throughout the spring months and into the early summer.  Adding a little extra water leading up to the event could result in the TVA pushing water through the system at a steady rate to regulate water levels up and down the river.  The anglers will sure be hoping for some much needed current to send these fish into a feeding frenzy.

“I think the team that can get in a good rotation off shore both days and have a little wrinkle in their plan whether it’s finding some in the grass or finding some at the dam will be holding the trophy after Thursday,” said Nathan Martin, a former UNA angler and local guide.  “I think it’ll be hard to rely on just one deal unless somebody can find a school that hasn’t been messed with…”  Finding a school that you have all to yourself could be the key to winning this event as we’ve seen with back-to-back defending Champions Cole Floyd and Carter McNeil.  The Bethel University duo found one productive area that they had mostly to themselves, and sacked up a lot of big fish each of the last two years.

Martin mentioned finding fish at the dam as a backup plan for these anglers.  Tailraces often factor in at some point throughout the course of the tournament.  Water flowing from Wilson lake down into Pickwick has been the scene for several winning bags in major tournaments throughout the years.  We will have a crew keeping an eye on that section of the lake during the week.

The tailrace up on Wilson, where water from Wheeler pushes down into the lake, is also an area to watch.  Teams will be allowed to lock up to Wilson during the event.  Wilson provides a less crowded, more diverse playing field than Pickwick Lake.  Boat docks, shallow cover, and offshore structure are all plentiful up there.  Though the winning bag has never came from Wilson, teams can consistently catch 12-16 pounds each day and earn very valuable points towards the Bass Pro Shops School of the Year presented by Abu Garcia.

Projected winning weights will be a major topic of discussion as anglers file through for check-in tomorrow.  Year in and year out, it takes a little over 40 pounds for two days to win this premier Championship event.  Conditions appear primed for someone to put together a pattern that yields 20 plus pounds of fish each day.

“I think you’ll see heavier weights across the board really, just because there’s more fish out deep for more people to find,” added Dawson.

These fish have had nearly a month now to make their way out deep and get settled in at their favorite locations.  This means that they’ve been gorging on baitfish to gain back the weight they lost during the spawn.  Look out for some really quality bags of fish to come to the scales throughout the event.

Continue to check back to our website and social media to keep up with the blog, see on-the-water photos from practice, and stay up to date on the latest news and notes from Florence, AL for the 2020 BoatUS Collegiate Bass Fishing Championship presented by Bass Pro Shops.