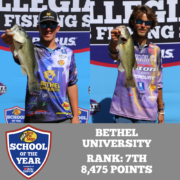 SAN ANTONIO, TX (5/14/2020) – As we continue to take a look at the Top 25 teams in the Bass Pro Shops School of the Year presented by Abu Garcia, I am beginning to notice a trend toward the top of the standings. Many of the teams ranked in the Top 25 find themselves in this same position year after year. The same can be said for perennial power Bethel University. Here is a look at their eight seasons in the School of the Year rankings:

Bethel is currently ranked 7th in the Bass Pro Shops School of the Year presented by Abu Garcia with 8,475 points. Two good finishes at the Championship will ensure they continue their streak of finishing in the Top 10 for the School of the Year race.

When it comes to the School of the Year rankings, I like to compare it to the Top 25 in college football. Teams go out and compete each week, then are ranked based upon their performance during that period of time. One team that we have all become accustomed to seeing at the top of college football is the University of Alabama. When it comes to collegiate bass fishing, Bethel is to bass fishing as Alabama is to football.

Bethel won the Bass Pro Shops School of the Year presented by Abu Garcia for the first time in 2018. That same year, Cole Floyd & Carter McNeil won the BoatUS Collegiate Bass Fishing Championship. In the program’s history, they’ve won the ACA Championship three times and the School of the Year once. And on the various other college circuits, they’ve won national titles and numerous other events.

Entering the 2020 BoatUS Collegiate Bass Fishing Championship presented by Bass Pro Shops, Bethel will be looking to complete a three-peat at this specific tournament. Cole Floyd & Carter McNeil have won this tournament each of the last two seasons with total winning weights eclipsing the 40-pound mark. Because of their Top 25 rank in the School of the Year race, Bethel will be sending four teams to this year’s championship. Look for anglers from Bethel University to make a lot of noise on the Tennessee River impoundment during mid-June.