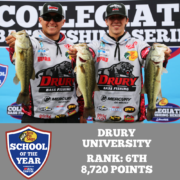 SAN ANTONIO, TX (5/15/2020) – “It means a lot to be in the Top 25.  Our program is small, so for us to achieve this feat and get our name out there is a great accomplishment.” – Cameron Smith, member of the 6th ranked Drury University Fishing Team.

Ending the year in the Top 25 for the Bass Pro Shops School of the Year is the goal of every school that competes at the college level.  The distinction of being one of the best teams in the country carries a ton of added value, as sponsors take note, universities realize the potential of a fishing program, and incoming high school seniors become interested in the team.  To reach that mountain top in the sport, it takes a lot of hard work.  “To be ranked in the Top 25 and crack the Top 10 at number six means all the hard work that we have put into the program is paying off,” noted Rick Emmitt, Coach at Drury University.

Five years ago, Drury University made the decision to dedicate attention and resources to putting their school on the map for having one of the best bass fishing teams in the country.  The school approached Emmitt and set forth a five-year plan filled with lofty goals. “My goal when Drury approached me about the coaching position was to put together a top program within 5 years and we have done that in year 5,” said Emmitt.  “ It was a struggle the first few years as many of our kids hadn’t even fished a bass tournament before.”

Over the course of the past few years, you can see the growth of the program.  In 2017, Drury University finished 47th in the Bass Pro Shops School of the Year presented by Abu Garcia.  During each of the following two seasons, the Missouri based anglers finished in 30th during back-to-back campaigns.  Now the school is on the brink of completing the best season in program history.  “Our kids have worked so hard to get to where we are and I think we have even better things ahead of us,” Emmitt added.  “Our Athletics Department is starting to understand how big college fishing has become and to have Drury considered one of the top programs in the country is very humbling.”

A large part of Drury’s success this season can be credited to their strong showings at Association of Collegiate Anglers events.  At each major ACA event during the 2019-2020 season, the school earned a minimum of 1,120 points.  Team member Jacob Welch kicked things off at the Big Bass Bash as he won Day 1 Session 4 presented by Garmin with a smallmouth bass weighing 4.17 pounds.  Then Cameron Smith and Cole Breeden closed out the month of October on a strong note with a 7th place finish at the AFTCO Open on Lake Dardanelle.  Combine those two tournaments with a solid showing at the Texas Lunker Challenge, and Drury earned more than half their points for the season out on the Bass Pro Shops Collegiate Bass Fishing Series.

“We are excited about a chance for a strong finish this year at the Championship,” noted Cole Breeden, a Drury University team member.  “This is the highest place that our school has ever been in, so we want to make the most of this opportunity.  We have high hopes looking forward to this event.”  Drury is hoping to finish the season strong at the 2020 BoatUS Collegiate Bass Championship on Pickwick Lake in Florence, AL on June 10th-11th.  This two-day event will crown a National Champion and award 1,500 School of the Year points to the winning boat in the final qualifying tournament of the season.  The mystique of a National Championship, combined with the crowning of a School of the Year winner, makes this the most highly anticipated event of the season.

“Our team always looks forward to the Championship on Pickwick as it is the Super Bowl of Collegiate Fishing,” said Emmitt.  “Wade and staff have worked hard to make sure they put on a safe event and follow all safety standards.  The most important thing is the kids get to fish tournaments again and compete for the Championship.”