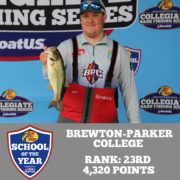 San Antonio, TX (4/22/2020) – To be ranked in the Top 25 for the Bass Pro Shops School of the Year presented by Abu Garcia is one of the most prestigious accomplishments in the sport of collegiate bass fishing.  Schools compete year-round on some of the best lakes in the country earning valuable points each step of the way.  Next up on our Top 25 feature is 23rd ranked Brewton-Parker College out of Georgia.  This team has competed at a high-level for the past 10 months and earned a total of 4,320 points.

“Being ranked in the Top 25 means a lot to our team because we are a very new team.  It’s awesome to see a small school being able to compete with the best college fishermen in the country,” noted Reese Kingston, Brewton-Parker College angler.

There are not many college sports out there that allow a small school from Georgia to compete at the highest level in their sport against some of the biggest names in division one sports.  That is what makes the Bass Pro Shops School of the Year presented by Abu Garcia so special.  For example, take a look at the 2020 Texas Lunker Challenge presented by Mossy Oak Fishing on Sam Rayburn Reservoir.  The top of the leaderboard is littered with teams from small schools like Schreiner University, to D-1 programs like Tennessee, and the 2019 defending SOY Champions McKendree University.

Jake Mims from Brewton-Parker College was the highest finishing angler representing the team as he claimed 18th place with a bass weighing 3.73 pounds.  Brewton-Parker earned a total of 1,240 points at the Texas Lunker Challenge presented by Mossy Oak Fishing.  Mims also earned the Yamaha Power Pay tournament contingency payout for being the highest-finishing qualified angler at the event.

The next tournament on the schedule is the BoatUS Collegiate Bass Fishing Championship presented by Bass Pro Shops at Pickwick Lake in Florence, AL.  With the season seemingly being put on halt since late March due to COVID-19, anglers are chomping at the bit to get out and compete again.

“We are most looking forward to being able to get back to competing in tournaments again since the virus has shut us down in the middle of our season,” Kingston added.

As we continue to highlight the Top 25 in the Bass Pro Shops School of the Year presented by Abu Garcia, be sure to check back tomorrow when we highlight 22nd ranked East Texas Baptist University.