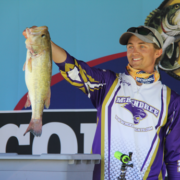 SAN ANTONIO, TX (6/15/2020) – Following the conclusion of the final event of the season, the point totals are calculated for the Bass Pro Shops School of the 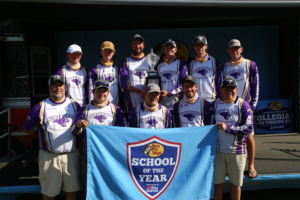 Year presented by Abu Garcia.  365 days of true dedication culminate with an awards presentation on the shores of Pickwick Lake at McFarland Park in Florence, AL.  In 2019, McKendree University was the last team standing when the final point totals were announced.  Here in 2020, the same can be said yet again as the Bearcats have a phenomenal week to claim back-to-back School of the Year titles.

“You know, it says we’re very consistent,” said Head Coach Jon Rinderer.  “To travel around the country…and to remain that consistent, it means a lot to me.”  McKendree University becomes just the second team in the history of the Bass Pro Shops School of the Year presented by Abu Garcia to win the prestigious title in consecutive years.  The school’s two highest-finishing teams this week earned a combined 2,500 points towards their year-end total.  Though they gave some ground back to the field, McKendree claims its second-ever School of the Year title by a 1,000 point margin over second place.  “It’s a great way to end the season.  Sending them off at the end of this year with a victory is just super sweet for me, and for them as well,” concluded Rinderer. 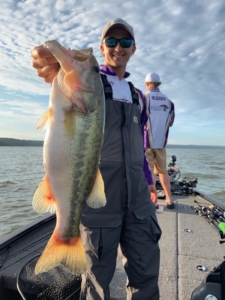 McKendree University’s quest for back-to-back titles began with a hot start from Bailey Bleser & Nathan Doty on Day 1.  The duo landed a limit of bass for roughly 13 pounds in the first 30 minutes of tournament competition in the 2020 BoatUS Collegiate Bass Fishing Championship presented by Bass Pro Shops on Pickwick Lake.  “I mean, our confidence went through the roof after that.  We got that school fired up right away, and we were catching them early yesterday,” explained Doty.

Following the conclusion of Day 1, McKendree had two teams in the Top 20.  Bleser & Doty sat in 20th place with 14.60 pounds, and Blake Jackson & Trevor McKinney catapulted themselves all the way up to 5th with 16.84 pounds.  Sporting the BUFF® Yellow Jersey going out on the morning of Day 2, the Bearcats knew they would need two decent limits to secure back-to-back titles.

During the school’s first title run back 2019, there was a defining moment during Day 2 of competition when Jackson & McKinney knew they had seemingly slammed the door shut on the School of the Year race(See the above video).  Here in 2020, a similar story line played out on the final day of competition.

With the clock quickly ticking towards the end of competition and only four fish in the livewell at that exact moment, the two McKendree anglers came across another team in the tournament that was experiencing some mechanical issues with their boat.  Jackson & McKinney made the sportsmanship like decision to pull over and see to the stranded anglers.  After assisting them, the School of the Year leaders returned to fishing with just minutes left until they were due back in to weigh-in.  On just their second casts after returning to fishing action, they hooked into a good fish that secured their limit and pushed them up over 14 pounds for the day.  “It’s just one of those days, do good deeds and good things come back to you,” noted team member Trevor McKinney.  “It was at that moment that we felt like we had it.  We had a good bag.” 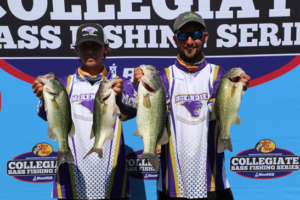 When the scales closed on Day 2, McKendree University finished the Championship with two teams in the Top 18 overall.  Jackson & McKinney were the highest finishing McKendree squad as they took home 9th Place honors.  For graduating senior Trevor McKinney, he couldn’t have written a better ending to his college fishing career.  “To say this is my final tournament, to end winning school of the year…it’s just incredible.  This is the best feeling in the world.  It was awesome last year, and it’s even better this year.”

Throughout this week, we will highlight the Top 5 teams in the final standings for the 2020 Bass Pro Shops School of the Year presented by Abu Garcia.  Check back tomorrow to read about the 2nd ranked team in the nation, the University of Montevallo.