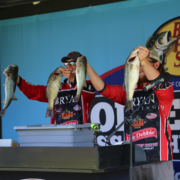 SAN ANTONIO, TX (6/15/2020) – The 2020 edition of the BoatUS Collegiate Bass Fishing Championship presented by Bass Pro Shops on Pickwick Lake in Florence, AL proved to be a hotly contested tournament.  Top teams were separated by slim margins entering the final day, and the door was wide open for just about any team inside of the Top 60 to swoop in and claim the title.  The Engel Coolers Hot Seat saw numerous occupants come and go on the final day as college fishing’s best young anglers dueled it out on the Tennessee River.  The last team standing at the end of the day, and now the newly crowned 2020 National Champions, were Bailey Fain & Preston Kendrick from Bryan College.

Fain & Kendrick found themselves in the lead after bringing a strong Day 1 bag to the scales weighing 19.82 pounds.  Anchored by a 5.91 pound big bass, the Bryan 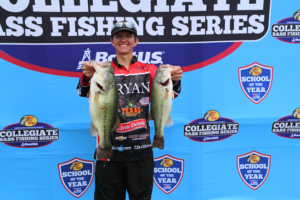 College duo locked in a pattern that proved successful during competition.  “We figured out the pattern on the first day of the tournament and ran the same pattern both days of the tournament. We used a topwater walking bait and a swimbait to trigger schooling fish while they were schooling,” said Fain.

Entering Day 2 with the lead, Fain & Kendrick felt the pressure of the lead bearing down on them. “I was pretty nervous getting ready for blastoff on the final day, but when the national anthem was being played I just had a sense of peace come over me that I haven’t felt in a long time, and I knew that was God telling me that it was in His hands,” noted Kendrick.  “I am not gonna lie, Bailey and I were both shaking when we got to that spot and started catching them so quick.” 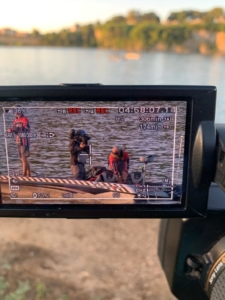 Our camera crew started the morning by covering the tournament leaders right off the bat.  Right away, the fish catching began. Fishing near take off, Fain & Kendrick boated their first fish as the final 30 boats or so were still filing out of McFarland Park.  Once the boat wakes died down and the water became calmer, the two anglers went to work.  “The pattern we were running was simply just throwing a topwater walking style bait and a swimbait in some fish that were chasing shad up near a shallow bank that led up to a point,” explained Kendrick.

ACA staff had a front-row seat to all of the action.  Fain & Kendrick were fishing within sight of the weigh-in trailer parked there at McFarland Park, allowing spectators to witness what would eventually end up being the winning moments of the event.  Bass were feeding on Gizzard Shad all throughout this particular area.  When a bass broke the surface chasing bait, the two anglers would quickly fire a cast in there hoping to trigger a strike.  Fain landed two nice largemouth early on by working a topwater through these schoolers.  When the schoolers weren’t up in the water column chasing, Kendrick used a mixture of swimbaits from Big Bite Baits, including the Suicide Shad and BB Kicker, to search for suspended bass. They left the area with a limit around 9:00 AM, culled once more throughout the day, and the rest is history.

“Coming into the final day we thought we had left the door wide open because we did not think we had as much weight as we had, but thankfully the Lord allowed us to have enough weight to take home the victory,” explained Fain.  There was a definite storyline that developed on the final day.  It quickly became apparent that with the tight leaderboard, it was very possible for a team that weighed in 12-15 pounds on Day 1 to go crack a 20-pound bag on the final day and win the entire event.  Bradley Dunagan & Dalton Smith from Campbellsville University did their best to fulfill this prophecy that was set forward.  Sitting in 26th after Day 1, they weighed in 20.21 pounds on the final day to occupy the hot seat all the way up until Fain & Kendrick came to the stage.

The 16.17 pound limit from Bryan College on Day 2 was enough weight for them to best second place by 1.36 pounds.  This victory by Fain & Kendrick marks the first time that a team from Bryan College has won the BoatUS Collegiate Bass Fishing Championship presented by Bass Pro Shops.  “It is finally starting to sink in that we won the National Championship, now that I’ve caught up on some sleep and had time to process everything,” added Kendrick.  “Bailey and I are both very thankful for the amount of support that we have received from everyone.”

As the week continues, we will highlight the remaining four teams that finished the event in the Top 5.  Tomorrow we will take a look at the 2nd place finishers, Bradley Dunagan & Dalton Smith from Campbellsville University.